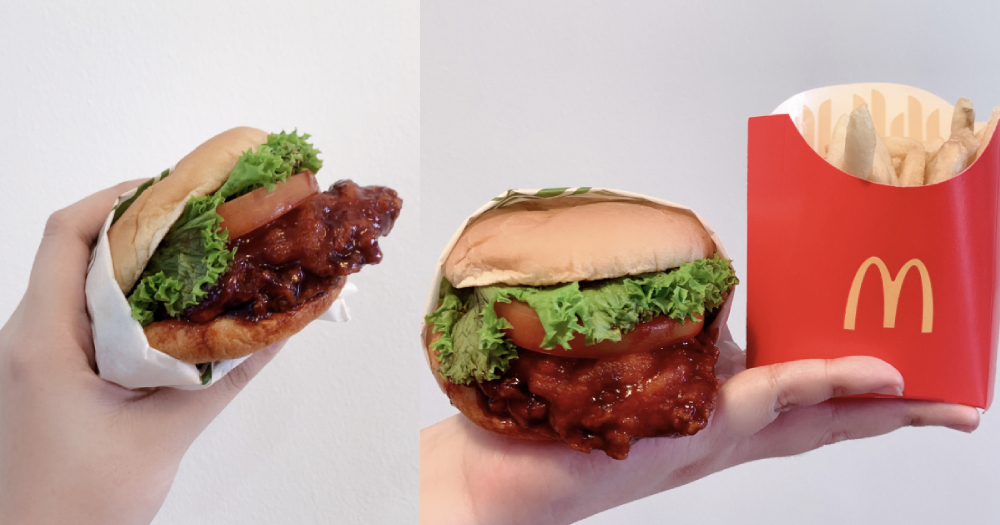 Follow us on Telegram for the latest updates: https://t.me/mothershipsg

McDonald’s Singapore launched the Jjang! Jjang! burger on May 5.

The Jjang! Jjang! burger also had a lot to live up to — jjang is Korean for amazing, and McDonald’s 2017 Korean-inspired offering, the Seoul Spicy Burger, was met with mixed reviews.

The first thing we saw when we received the delivery was the huge box, which made us slightly confused.

Turns out that it was merely a distraction as it contained a cushion version of the burger, and the real one was sitting in a smaller box.

What we didn’t expect was how messy the burger would be.

The sauce was so generously slathered onto the fried chicken thigh that it was all over the wrapping paper.

And then it went all over the table.

Picking it up made things worse because the burger started dripping sauce everywhere.

We were grateful the burger was eaten at home instead of in McDonald’s, because cleaning up would have otherwise been more of a chore.

The burger hack you didn’t know you needed

Tasked with having to take photos of the burger before eating it, we wondered how to deal with the amount of sauce that seemed to drip endlessly (true story: random drops would make their way to the table even after an hour of handling it).

A quick search showed that wrapping the burger in a “diaper” would save you a lot of grief.

(McDonald’s, if you’re reading this, please consider prepping the burger this way instead.)

Proper inspection of the burger only commenced when we didn’t have to worry about the sauce getting everywhere.

The burger was clearly on the bigger side, somewhere between the regular and Double McSpicy, but the chicken thigh we had was definitely thicker than any McSpicy patty we’ve ever seen.

Despite being dunked in sauce and having it sit around for an hour while we took pictures, the chicken thigh remained surprisingly crispy.

The sauce, oddly enough, tasted like the sauce used for tteokbokki (Korean rice cake), except much spicier.

You first notice how sweet the sauce is, but that’s quickly overtaken by the taste of the chicken thigh, which carries enough flavour that we wished McDonald’s sold it on its own.

Before we could think, “Eh, not spicy what”, the fire finally hit.

The tomato and lettuce were nice complements as it helped offset how jelak the burger got after a while.

This is one of the better burgers that we’ve had from McDonald’s. It’s also good for the ‘gram, as you can tell from this wannabe-atas pic.

We’re on the fence: while it tastes more like something you’d get from a more upscale burger joint than a fast food restaurant, eating the entire thing in one sitting is a challenge in itself.

Is it better than a McSpicy?

The heat from the Jjang! Jjang! burger comes from the sauce alone, but the same sensation emanates from every morsel of the McSpicy patty.

The McSpicy is definitely spicier, although we had to reach for our drink a few times while chowing on the Jjang! Jjang! burger too.

That being said, we still think that nothing beats the OG —the McSpicy is still the best fast-food burger.

As for whether you will end up on the porcelain throne after the Jjang! Jjang burger, well, it’s a coin flip. Take your chances, we say.

Wait! This is a new job ad. If you’re good at bossing people around leading a team and creating regional video content on lifestyle and pop culture, check this out?

How one traditional store has pivoted to younger market