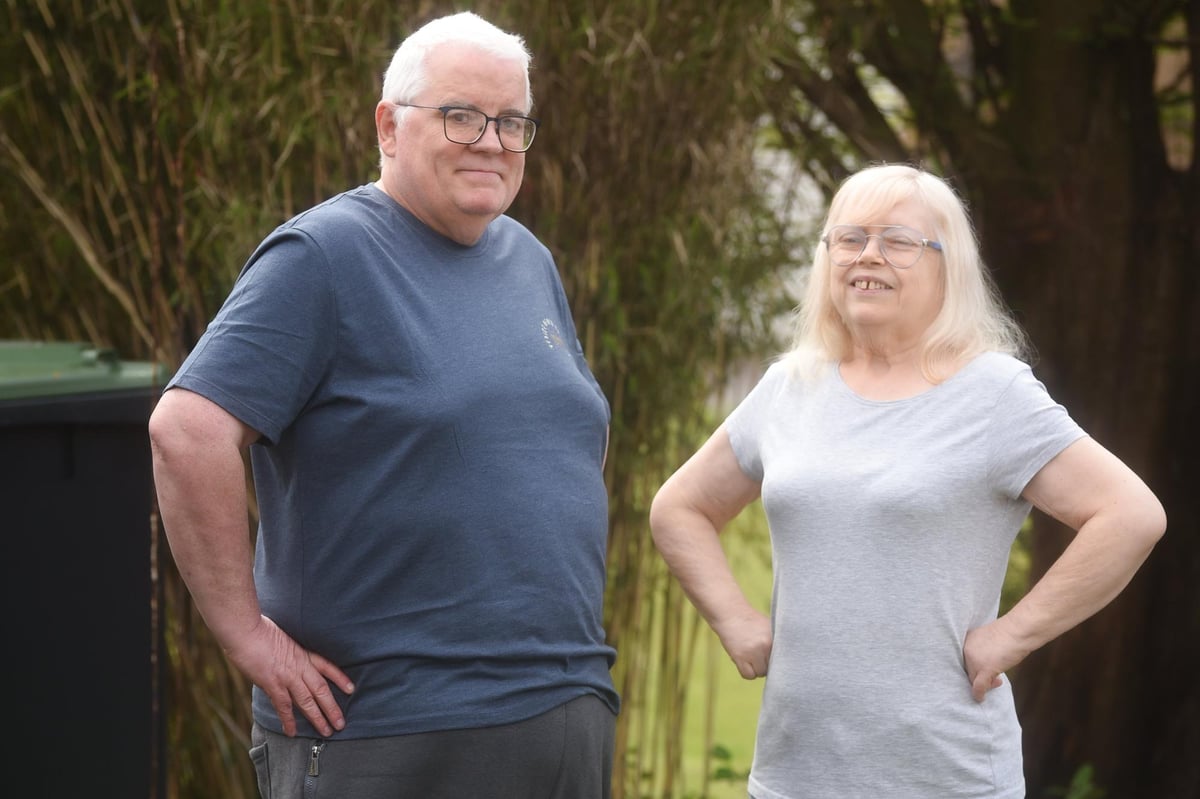 Back in June 2021, the Blackpool couple were in a rut. Having both struggled with their weight for decades, they were trapped in a vortex of unhealthy eating habits and subsequent health consequences: Mary had developed Type 2 diabetes and arthritis in her knees whilst Tony, weighing 28 stone at his heaviest, was barely able to get around the house.

“We were just eating the wrong stuff – a lot of takeaways, fast food, junk food, crisps, chocolate… all the usual things which you just shouldn’t eat too much of,” says Tony, 60, “We got into bad habits: having buns and cakes with cups of tea and portion sizes which were too big.

“It caught up with us and got to the point where I literally couldn’t leave the house – we had to buy this bungalow because I couldn’t use the stairs as a result of how much pain I was in,” Tony adds. “I was morbidly obese, I had no life, and my weight affected everything – I’d practically given up and had depression.”

“We’d tried everything,” says Mary, also 60. “A load of different diets, Weight Watchers, counting calories… nothing worked for us. It got to the point where I had to push Tony around in a bariatric wheelchair.”

Then a leaflet came through the door. Intrigued, Mary called the number and, down the line, Natalie Meadows, group consultant for Blackpool Slimming World, answered. It was to be a life-changing phone call.

“When Mary got the leaflet through from Natalie, I was apprehensive, but said we should give it a go,” explains Tony, who – like Mary – is from Belfast, with the couple having moved to the North West 15 years ago. “It was probably the best thing we ever did.

“The group is just so supportive and everyone has got to know each other really well,” he adds. “We keep in touch via our WhatsApp group and having other people there to talk to really is a big help.”

Tony and Mary Loughran before their weight loss

Mary is in total agreement. “Giving Natalie a ring was definitely the best thing we ever did,” she says. “I’ll admit the first session was a little scary and a bit nerve-wracking, but it ended up being really good because everyone was so welcoming.

“Straight away, we learned that there was a large selection of foods you could still actually eat whilst sticking to the Slimming World programme, which surprised us,” she adds. “Learning more about how much of what you could eat was a big change and a big help.”

Over the past 12 months, the couple have discovered a love for healthy food, are making better culinary choices, and have embraced the physical and mental benefits of exercise. Their journey has seen Mary all but reverse her Type 2 diabetes, while Tony has ditched the mobility scooter in favour of working out six times a week.

A year on from that fateful phone call, Tony has lost eight stone, nine pounds while Mary has lost four stone, two pounds. In their words, life is worth living again.

But, prior to turning their lives around, the Loughrans were far from alone. In England, 68% of men and 60% of women are overweight or obese, while overall obesity levels have increased from 15% to 28% since 1993, meaning that, out of every 1,000 adults in the country, just 340 are a normal weight.

The reality is that millions of people struggle with their weight, with a deluge of processed, sugar-filled, addictive, and cheap food flooding the market and resulting in a proliferation of health issues caused by the population’s decreasing fitness levels. Such a scenario also puts undue pressure on our already-overstretched National Health Service.

But the fix is far from simple, with those grappling with complex relationships with food and eating living often confronted with deep-rooted psychological barriers to overcoming their issues. Overeating, stress-eating, and self-control goes far beyond mere willpower.

For Tony and Mary, learning about food optimisation was key. After grasping about the science behind energy density and satiety, which delves into how different volumes of different kinds of foods can make us feel more or less full, the couple went home and binned the junk food and started making home-cooked meals from scratch.

“People who have a low satiety response feel less satisfied after eating,” says Professor James Stubbs, Professor of Appetite and Energy Balance at University of Leeds. “They’re more likely to crave high fat foods, to snack between meals, and generally are less able to stick to their plans around food choices.

“Therefore, they’re more likely to consume more calories than people with a high satiety response and find it harder to manage their weight,” he adds. “They’re also less likely to be able to lose weight because of how hungry they feel and how difficult they find such a weight loss regime to sustain.”

Thankfully for Tony and Mary, they found the transition to healthier but more filling foods an easy one to make. “You never really go hungry because there’s a real variety of foods you can actually eat,” says Mary. “Knowing what was in our food was important and I’ve found that I love cooking now.

“For us, it was just about cutting out the bad decisions whilst changing little things and making sure you were eating plenty of vegetables and fruit,” she adds. “And we had the support from the group at the same time, which was a crucial factor.”

“We picked up on the food optimising really quickly and now we cook a lot more,” comments Tony. “We’re eating a lot more fresh stuff now and, to be honest, we enjoy it a lot more compared to before when we were just ordering takeaways and chippies.

“I feel 100% better in myself, too,” he adds, with the couple having been named Slimming World’s ‘Couple of the Year’ as well as claiming the ‘Slimmer of the Week’ award 18 times between them. “For me, it’s basically a miracle – we’re both over the moon with how everything has gone. We didn’t dream we’d do this well.”

With their kitchen cupboards now looking a lot better, Tony and Mary also hit the gym together three times a week, whilst Tony also goes swimming three times a week and Mary goes for a nightly walk. Compared to their lifestyles a year ago, things couldn’t be much more different.

“We feel so much better for losing the weight,” says Mary. “Mentally, I feel like a new person. And it’s definitely a sustainable change.”

“We’ll never go back to how things were before because we’ve seen what a difference losing the weight and being healthier has made,” says Tony. “It’s improved every aspect of our lives.”