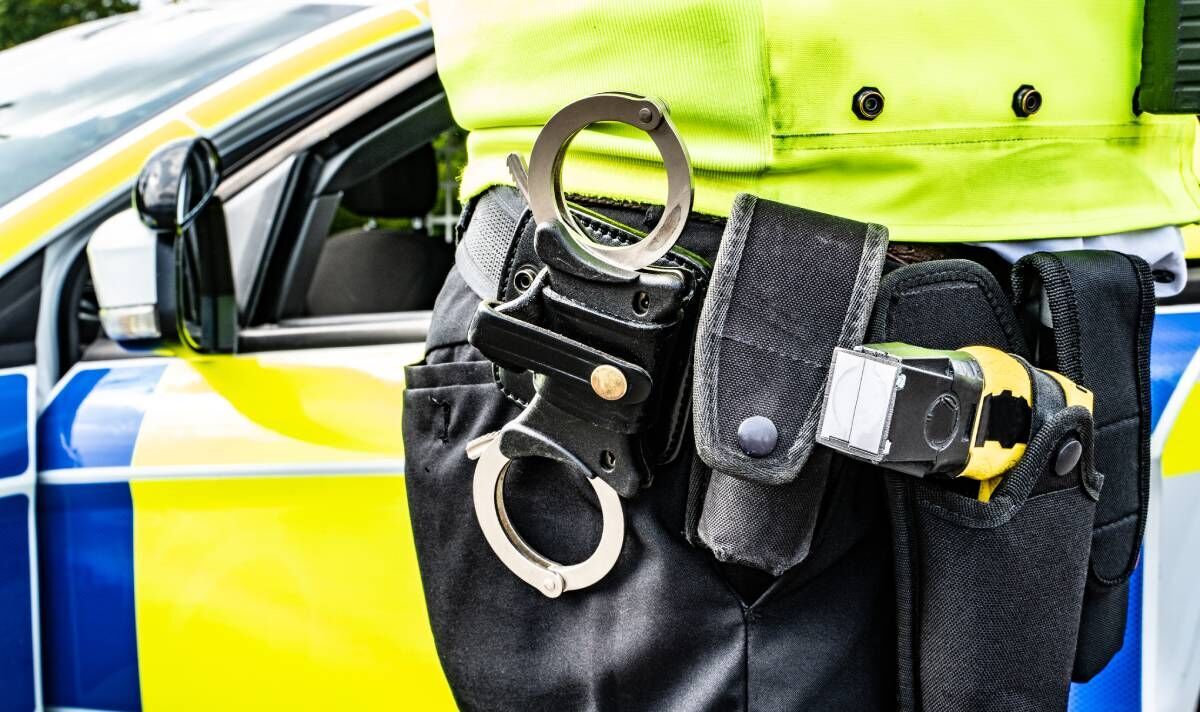 Special constables are now going to be issued with tasers (Image: GETTY)

OMG! A lot of people I’ve met who are special constables really should not be given a taser, but then a lot of professional police officers shouldn’t be allowed any kind of sharp instrument without adult supervision. I’m being sarcastic but only slightly.

Too many of our police are not fit for purpose and couldn’t catch a criminal if their lives depended on it. They are much happier going after those of us who might have parked in the wrong place, or having a quiet word with people demonstrating about the end of the world.

As I’ve said before, either on my TalkTV programme or in these pages, we need to scrap all the different constabularies based on counties and have just one UK police force, with one chief constable and one assistant chief constable.

And that force should get on with catching criminals, not wasting its time investigating “non-crimes” and whether someone had a bit of birthday cake during lockdown two years ago.

And rather than pussyfooting around and giving people water when they have glued themselves to a road they should be unglueing those people and taking them away. The cops also need to be fit.

I don’t want to see a dumpy little person running around in a high-viz jacket expecting to be taken seriously as an upholder of the law.

I know this is pretty contentious stuff but our police force – sorry, police service – seems to have been turned into an arm of the social services when what we need is a proper, efficient crime-fighting organisation.

Extol our heroes not the vandals

Everyone else seems to have had their say on the Margaret Thatcher statue but I wanted to add my two-pennies-worth.

The statue, in her hometown Grantham, is long overdue. Whether you liked her or not, she did more for this country than any other prime minister. I worked on radio during the miners’ strike and various other social issues. And she dealt with them for the good of the country.

Luckily she was not obsessed with being liked, because if all you want is to be liked then you become pretty useless. The fact that the statue could not be erected sooner for fear of just the sort of vandalism that did occur is shameful.

We shouldn’t kowtow to the criminals but honour those who should be celebrated, and arrest the idiots who cause damage. It’s the same with yobs who want to pull down statues of Winston Churchill.

They need to really learn the history of this nation. You’re free to disagree with the way memorable figures of the past behaved and the decisions they had to make in the context of the time they lived in.

But pulling down or defacing statues of people who did great things is neither funny nor clever – and the fool who threw eggs at the Thatcher statue certainly isn’t.

Pulling down or defacing statues of people who did great things is neither funny nor clever (Image: PA Images)

Postman deserved to get the boot

I don’t know whether you caught the footage last week of a postman kicking a little dog.

The incident, in Greater Manchester, was captured by the owner’s video doorbell and it was all over social media.

I have heard the postman – who claimed the dog had nipped his ankle – has been “spoken to, internally” and the Royal Mail sent a letter of apology to the family, but he seemingly got masses of support for doing it.

Not from me he didn’t. I want him sacked as an example to anyone else who behaves in that way.

The dog, which now apparently wets itself every time the doorbell rings, was only a tiny thing, for goodness sake. It was hardly going to savage him.

For some reason I was watching a discussion in Parliament on the impact of body image on mental and physical health.

Basically, it seemed to me they were saying it’s OK to be fat. Psychologist Dr Angela Meadows of the University of Essex told the Health Select Committee that telling children they are overweight tends to lead to them putting on even more weight in later life.

She said the message to children should not be about weight but living a healthy lifestyle.

Well, I used to be overweight at school and used to be called fat – and much worse – and it certainly made me decide to lose some weight. And I’m very glad I did.

So how can you address the issue of being healthy without recognising that someone is unhealthily overweight? It’s always going to be the, er, elephant in the room – except you can’t say that in case it affects someone’s mental health.

Jamie Oliver has been shouting his mouth off again. Perhaps he’s not getting enough publicity.

He was protesting in Whitehall with bowls of Eton Mess as a personal attack on Boris Johnson. What a ridiculous gesture.

He was complaining that the Government has delayed a ban on buy-oneget-one-free food which, in this inflation crisis, seems like a damn good decision.

He was also moaning about the TV advertising of junk food.

Surely people have the right to eat whatever rubbish they want and if they’re stupid enough to eat nothing but junk food then leave them to it.

The amount I spent on sweet shrimps, jelly babies and the rest when I was at school must’ve done me more harm than any KFC or McDonald’s could. Now I’m off for an Egg McMuffin (other fast food breakfasts are available).

As you know, I’m quite a regular at hospital at the moment, having stage four kidney cancer, so I feel I need to continue to point out that our medical staff are absolutely amazing.

It is the management that is all wrong. I’m staggered that the number of senior officials in the Department of Health and NHS England has more than doubled since February 2020, from just under 800 to 1,800.

It was front-line staff who were risking their lives dealing with Covid in all that time. So why all the extra penpushers?

I had phone calls recently from three people asking me if I knew I had an appointment and would I be turning up!

The NHS staff working to save lives, doing proper jobs, know the problems but they don’t have time to complain and they risk getting in trouble from the same managers who are the issue.