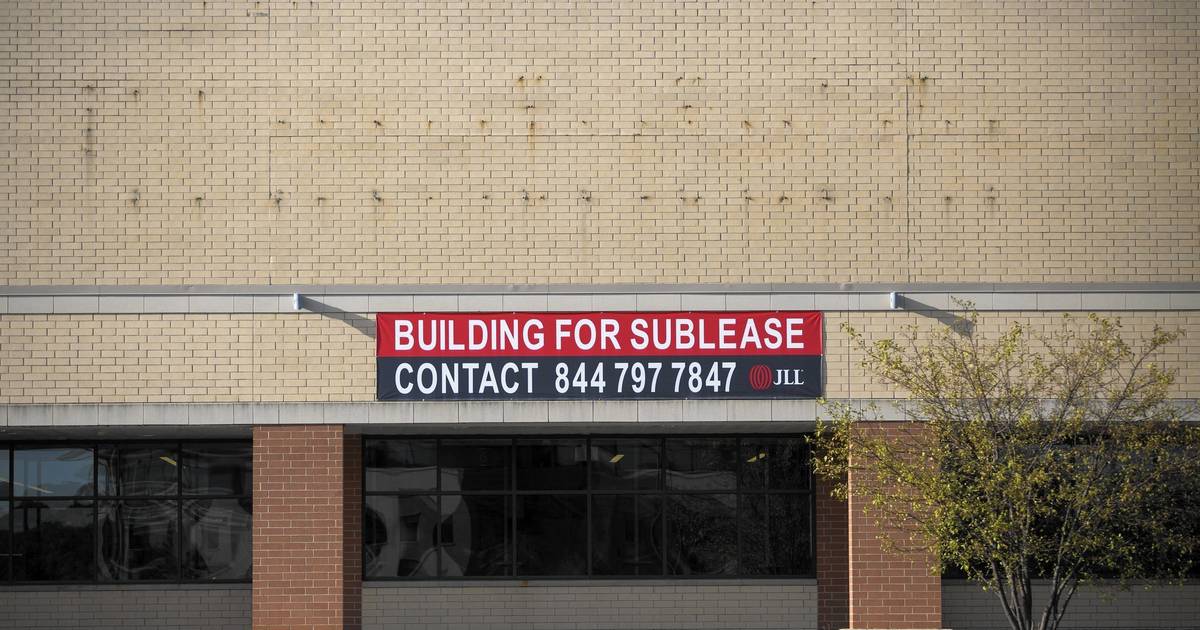 For going on three years, the former grocery store in downtown Schaumburg has been shuttered.

The Dominick’s name is barely visible now, the windows are coated with a fine layer of grime and a chunk of the facade appears to be missing, exposing wooden beams.

Last July, Tony’s Finer Foods bought the shopping center with plans to open a store in the vacant Dominick’s. But before the deal closed, Jewel-Osco’s parent company, Albertsons, extended its lease on the store for another five years, through May 2021.

Now Tony’s is Albertsons landlord, and neither has immediate plans to open a grocery store there.

A sign advertises that a building which used to house a Dominick’s grocery store is for lease on Sept. 12, 2016, in Glen Ellyn. (Erin Hooley / Chicago Tribune)

“It upset a lot of our residents, as well as business owners. It was extremely frustrating,” said Matt Frank, Schaumburg’s economic development manager, of the plot twist.

When Dominick’s went out of business in December 2013, it added 72 empty stores to the Chicago area’s retail landscape. The most desirable ones were snatched up by chains like Jewel-Osco, Mariano’s and Whole Foods Market. Last year, Albertsons acquired Safeway, Dominick’s parent company, giving it control of most remaining Dominick’s leases and property in the area.

At least 18 suburbs are still trying to turn the lights back on in the darkened stores. As time drags on, the prolonged vacancies create pockets of blight in once-thriving retail areas, hurting town coffers, hindering other businesses and inconveniencing residents. Some officials blame Albertsons, saying the company is paying rent on dark buildings to block out Jewel-Osco competitors.

“Absolutely not,” Withers said. “Our goal is to get someone in these boxes. We don’t want dark stores. … It’s extremely important to us that we keep communities vibrant.”

While Albertsons’ corporate real estate team makes decisions on the vacant stores, Withers has input, and in some cases he has tried to quell the rising angst in some suburbs, say some suburban officials.

Withers declined to discuss dealings with specific stores in detail but said the lease extension in Schaumburg was a show of interest. “Yes, we had interest in doing something there and continue to like that real estate. From my perspective, it does have value,” Withers said.

But current economic pressures in the grocery industry, particularly in Chicago’s hypercompetitive market, make it difficult to open more locations in the vacant stores at this point, Withers added. So for now, Albertsons is listing the 66,000-square-foot Schaumburg store for sublease.

Schaumburg officials still would like to see a grocery store in the Town Square Shopping Center, which sits between a park and the bustling Schaumburg Township District Library.

“The challenge is trying to get the two parties together to find the right user for the space,” Frank said.

State Farm, which makes real estate investments in addition to selling insurance, sold the shopping center to Tony’s but wasn’t aware Albertsons exercised the option to extend the lease until after the deal closed, said Missy Dundov, a State Farm spokeswoman.

A Tony’s Finer Foods representative did not return requests for comment.

A box of chocolate mousse is all that remains on an endcap. (Scott Strazzante, Chicago Tribune)

A similar situation is unfolding in west suburban Geneva, where Albertsons recently extended its lease for another five years on an empty former Dominick’s in the busy Randall Road corridor, said Geneva Mayor Kevin Burns.

“Despite our best efforts at negotiating a mutually beneficial deal, Albertsons continues to pay in excess of $1 million a year to keep the store dark,” Burns said.

Burns wants to see the space filled by a grocery retailer, both to meet the need for that part of town and to generate sales tax revenue. But while there’s been “strong” interest from other chains in the 72,000-square-foot store, Albertsons’ lease includes language that prohibits potential competitors from coming into the space, Burns said.

“Despite our frustrations and deep disappointment, we don’t hold the cards in that location. Albertsons holds all the aces and all the kings,” he said.

Mary Frances Trucco, Jewel-Osco spokeswoman, wouldn’t say whether the company’s lease in Geneva prevented other grocery stores from operating there. Geneva was also not included on a list of 18 vacant former Dominick’s stores leased by Albertsons that Jewel-Osco provided to the Tribune. Trucco wouldn’t say why not.

“The Albertsons corporate real estate team is working with the landlord in Geneva,” Trucco said in an emailed statement.

Albertsons has been “extending dark store leases” to keep out competition, a tactic that’s “objectionable, but not unusual” in the Chicago area’s extremely competitive grocery industry, said Andrew Witherell, a commercial real estate broker who consulted with Mariano’s on its expansion into 11 former Dominick’s stores.

“It’s clear that some retailers have been turned away as a result of (Albertsons) exercising its options,” Witherell said.

One point that both Witherell and Jewel-Osco’s Withers agree upon: The best former Dominick’s locations already have been taken. “The stores remaining are at lesser value. We went after the best of them,” Withers said.

As examples, Jewel-Osco recently opened a store in an empty former Dominick’s in Bensenville and expects to open its second Mundelein store in November.

Withers said Albertsons is willing to sublease to other grocery chains but emphasized that retailers have to be “creditworthy.”

Some arrangements haven’t worked out. In Northbrook, Arlington Heights and Elk Grove Village, Albertsons subleased the vacant stores to Joe Caputo & Sons, a family-owned grocer, after it acquired those leases in the Safeway acquisition. Caputo & Sons closed those stores after falling deep into debt to a produce wholesaler, so they’re once again empty.

Elk Grove Village Mayor Craig Johnson had grown frustrated after hearing from a “half dozen” grocery retailers in the spring who said they were interested in the empty space but were being ignored by Albertsons.

“To his credit, (Withers) wants to work with Elk Grove Village, the owner of the property and any potential grocery store retailers,” Johnson said.

The mayor added: “We just don’t want to be held hostage.”

Buffalo Grove officials don’t want that either. In May, the village board voted to amend the zoning code to prohibit so-called negative use restrictions on property that allow retailers to prevent competitors from moving into empty stores. Chris Stilling, community development director, said it was a “proactive” measure not directly aimed at Albertsons.

Last month, Buffalo Grove officials also considered issuing citations to Albertsons, which allowed the condition of its vacant Dominick’s store on Lake Cook Road to deteriorate, Stilling said. But in recent weeks, Albertsons has made improvements at the site, such as restriping the parking lot and landscaping, he said.

“I think it will come down to the bottom line and I believe (Albertsons) will eventually want to recoup some of these costs,” Stilling said.

Other towns have banded together to attract retailers. Last year, nine western suburbs launched a joint effort, “One Call/10 Stores,” to try to fill some 700,000 square feet of former Dominick’s space. Most of those stores, however, remain empty.

But Fradin also acknowledged there hasn’t been much interest from grocery retailers in taking the space. Village officials are open to considering other nonretail uses for the space, he said.

This much appears certain: Some of the 72 former Dominick’s stores will never be grocery stores again. A few have already been repurposed as furniture or thrift stores.

Are the remaining former Dominick’s stores more of an opportunity or a burden for Albertsons?

“I would say there is the possibility of future opportunity and many of the closed stores are certainly burdens,” Withers said.