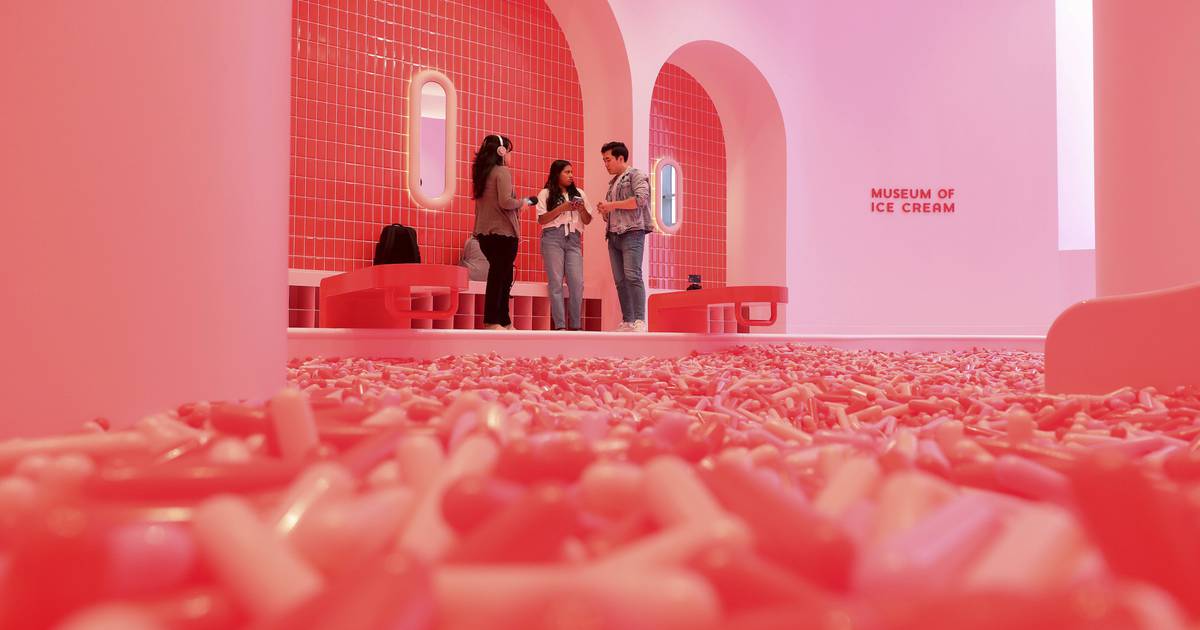 Call it an ingenious addition to our city’s hot dog scene or an affront to Chicago dogs everywhere — no matter how you feel about the Museum of Ice Cream’s exclusive hot dog-flavored ice cream, you can’t deny it’s the talk of the town.

We’ve had hot dogs on the brain of late, what with last week’s National Hot Dog Day and news of a storied stand expanding to the North Side. And while the savory ice cream — scooped into a pink-tinged bun and drizzled with mustard — might be a bridge too far even for the most ardent fan of encased meats (it’s the cornichon for me), I have to say, I’m dying to try it.

Who knows when I’ll find the time, though, with a packed summer schedule showing no signs of slowing down. If you’re heading to Lollapalooza this weekend (for what could potentially be the last time in Chicago?), be sure to check out our critic’s list of must-see acts, and our roundup of after-party shows and late-night food nearby.

If you’re among the Chicagoans who avoid Lolla like the sun-tanned plague, perhaps this weekend’s Newberry Book Fair is more your speed. There’s also countless immersive experiences to explore, a pop-up with Baja seafood that left our food critic stunned, and reviews of psychological thriller “Resurrection” and Peacock series “The Resort” fresh off the presses.

Soak it in while you can, Chicago — the new school year is already on the horizon! — and we’ll see you next week.

Tribune music critic Britt Julious has sketched out the can’t-miss acts and best stages for each day of Lollapalooza, which launches Thursday in Grant Park.

With a sprawling set of stages featuring acts like Tove Lo, Lil Baby and Dua Lipa — plus a slate of Chicago artists including 100 Gecs, Lil Durk, Horsegirl and Beach Bunny — you’ll need all the help you can get in navigating your way through the fest.

Chef Stephen Sandoval grew up in San Diego and made regular trips across the border, because his dad owned a car wash in Tijuana. After getting his culinary degree, he traveled the world cooking — but he always returned to Baja.

“I think it’s a really exciting time in Baja,” he told Tribune critic Nick Kindelsperger. “There’s this passion and creative freedom that chefs have there.” He channels that passion into stunning seafood dishes at Sueños — and our critic couldn’t get enough.

Recent pandemic-era thrillers — ranging from Elisabeth Moss’ “The Invisible Man” to “KIMI” have invested real and raw feeling in the woman-in-peril scenario. The latest, “Resurrection,” has another riveting performance, this time by Rebecca Hall, writes Tribune film critic Michael Phillips.

But there’s still something missing from the film, he writes. Read more in his full review.

Clint Bautz waited five years to move Lake Effect Brewing into a former Northwest Side fire station. Finally, he could wait no longer.

Bautz sat down with Tribune beer reporter Josh Noel to share plans on where one of Chicago’s smallest breweries will put down roots instead.

Had Lucido’s Tacos set up shop in its new Little Village storefront when Tribune critic Nick Kindelsperger was scouring the city for the best tacos around, it definitely would have made the list, he writes.

So consider this a mini update to his list of Chicago’s best tacos — and learn more about what it took to find Lucido’s forever home.

Maybe hot dog-flavored ice cream isn’t your thing, and that’s OK! There’s still lots to explore, not only at the Museum of Ice Cream, but at a smattering of intriguing new restaurants detailed by Tribune food critic Louisa Chu, from a Little Village churro shop to Cambodian fine dining in Rogers Park and a new Humboldt Park diner replacing Jeff & Judes.

Here’s hoping the mystery at the center of new Peacock series “The Resort” gives William Jackson Harper’s character less of a stomachache than those that plagued his Chidi Anagonye on “The Good Place.”

But critic Nina Metz says there’s more plaguing this series than tummy troubles — and she breaks it down in her full review.

Between sandwiches, scones and sweet pastries, afternoon tea is easy to love. So we put together this list of Chicago’s best afternoon tea spots, from lavish pastry towers to lessons in tea steeping.

For the members of Chicago band Gardens, gone are the days of chasing record label contracts and financial gains. No, Gardens is interested in something much simpler: music for music’s sake, writes Tribune critic Britt Julious.

Now deep into its third decade, having been on “vacation” for two pandemic years, the sale takes place this weekend.

It is a literary feast, writes the Tribune’s Rick Kogan. Inside the library, spread in a number of rooms, you will find something in the neighborhood of 40,000 used books — many of which can be had for as low as $3. Who could resist?

Big screen or home stream, takeout or dine-in, Tribune writers are here to steer you toward your next great experience. Sign up for your free weekly Eat. Watch. Do. newsletter here.