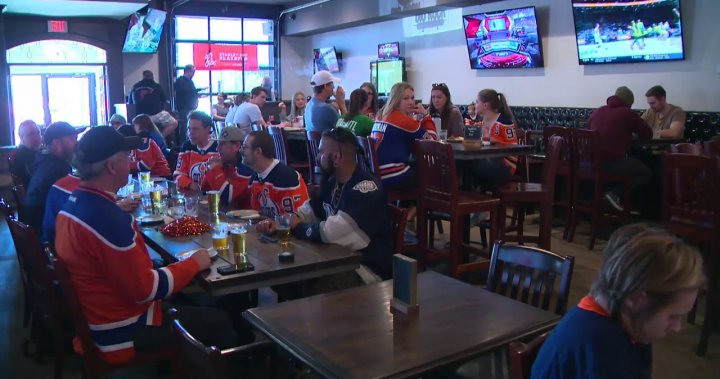 While it’s no secret that hockey fans have been out in full force supporting their favourite Alberta NHL team — with both the Edmonton Oilers and Calgary Flames in the post-season — it turns out those playoff runs are translating into huge benefits for local bars and restaurants.

Moneris Solutions recently released data that shows spending at bars and restaurants in both cities was up in a huge way during the first round of the playoffs.

“The last time I saw anything like this was pre-pandemic, really. So it’s all very good news for the economy and the signs of things to come, hopefully,” said Peter Goldsztajn, vice president of corporate data and analytics at Moneris Solutions.

“It’s all good for business.”

“That’s very interesting,” Goldsztajn said. “It seems like even when the team loses, the city wins (on) spending, which is an interesting finding.”

During Games 2 and 7 — when the Oilers won — spending at establishments near Rogers Place was up 60 per cent.

During Calgary’s first-round series against the Dallas Stars, Moneris found spending on food and drink near the Saddledome translated to a 32 per cent increase, while there was an increase of 13 per cent at establishments in the rest of the city.

Goldsztajn said one in three transactions in Canada are captured through Moneris point of sale devices. The company measured the area near each of the arenas by identifying the Forward Sortation Areas (FSA), then did the same for the rest of the city.

“Every time you tap your card, swipe it, put your PIN in, we would be capturing that via the POS terminal. So it’s pretty instant and accurate.”

David Robertson is the general manager of Smoke BBQ + Bar in Edmonton’s Ice District, just a block from Rogers Place.

“It was wild. We were busy as all hell. It was an experience,” said Robertson of business during the first round of the playoffs. “Nothing really prepared us for the first round. It was very, very busy. Welcome, indeed, especially after all the difficulties with COVID and everything.”

The business has extended hours on game days to keep up with the demand. They’ve also opened up a back room for overflow. Robertson said the pub is having about a 25 per cent increase in business right now.

“It’s wonderful. You can see all the businesses in this area really thriving.”

“It is scary. Running the door on a busy night, you can have 1,000 people just show up at once and you’re trying to manage what’s going to happen and see what tables are available,” he said. “It is exciting… It’s the best thing ever.”

Concordia University economist Moshe Lander said each playoff game in Edmonton and Calgary generates in excess of $1 million in ticket sales alone. When you tack on spending for concessions, parking, apparel and bars and restaurants, he said a playoff series could generate anywhere from $5 million to $10 million for the local economy, most of which is concentrated within one square kilometre of the arena.

“For anybody who’s in downtown Edmonton who’s been struggling with COVID issues for the last two years, the fact that they could be seeing $5 million to $10 million worth of economic activity, it’s great news for them.”

1:42Calgary businesses set to reap the rewards of Battle of Alberta

Calgary businesses set to reap the rewards of Battle of Alberta

However, he added the increased spending in some areas is likely having the opposite affect other areas of the economy.

“You might find that West Edmonton Mall is saying that we don’t find as much foot traffic these days because people are staying away, they’re using their money on game tickets or game merchandise rather than on the local retailers,” Lander said.

“The money is disappearing from somewhere. So when you kind of net everything out, it’s not as big as you think. Even if you want to tell me that, ‘Hey, there’s an entire set of tourists in Red Deer that are going down to Calgary or going up to Edmonton and catching the game.’ Alright, so that brings a net positive to Edmonton and Calgary but it means that Red Deer is going to find that their economy has surprisingly slowed because of the Battle of Alberta because those Red Deer residents aren’t spending locally, they’re now spending in the big cities.”

And while there are some major “warm fuzzies” coming from the first playoff Battle of Alberta in more than 30 years, Lander said it will soon end for one team, leading to a “hangover effect.”

“I’m not saying that this would trigger a recession or anything like that — there’s lots of other economic engines that are going to generate our recession that’s upcoming — but you can see that there’s that dip.”

With fans on edge amid the Battle of Alberta, rekindled rivalry may actually be reducing stress

Goldsztajn said he anticipates the spending at restaurants and bar has continued into the second round, particularly given the Battle of Alberta rivalry.

“The Battle of Alberta — that’s certainly exciting,” he said. “It brings happiness. People enjoy going out, being social and especially with the excitement of the Battle of Alberta, I definitely see some lift to continue – there’s no doubt about it.

“It’s an exciting time for hockey, playoffs always are. So I do think it’s going to continue.”

The company plans of capturing similar data this round, creating a Battle of Alberta of their own.

“We can put the cities against each other to see who spends more, regardless of who wins the actual game,” Goldsztajn said.

How Small Farms Are Reclaiming Culture in Palestine