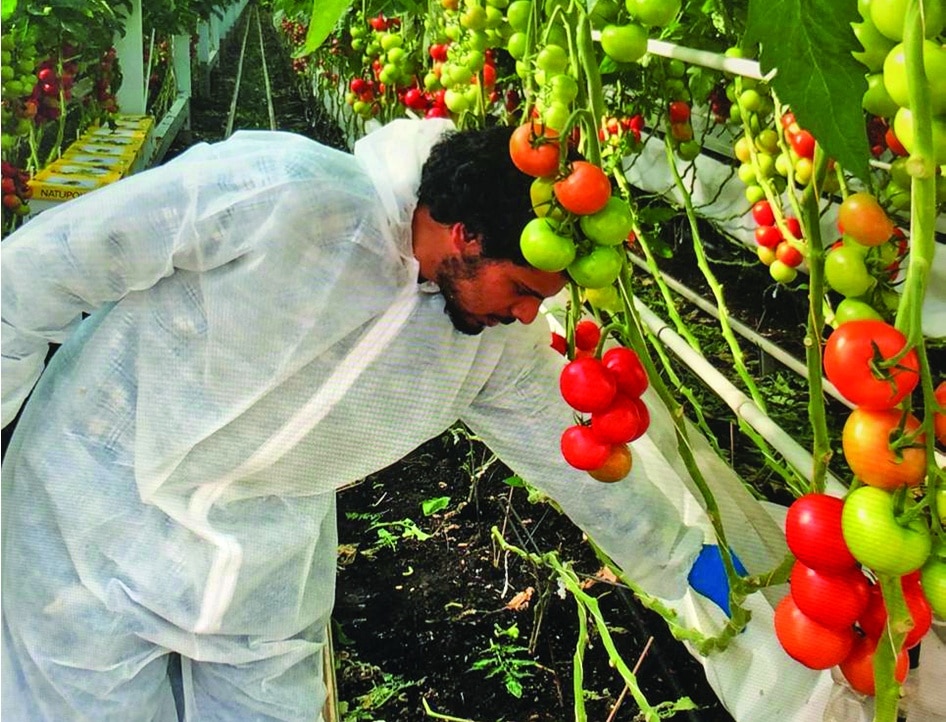 KUWAIT: Trees reduce air temperature and the intensity of greenhouse heat by lowering carbon dioxide levels. Greening is not merely an act of beautification, but also a basic need for the environment and population of Kuwait. Kuwait Times spoke with Abdulrahman Al-Fraih, Manager of the Organic Agriculture Department at the Public Authority for Agricultural Affairs and Fish Resources to learn more. Fraih is an expert in researching production of organic vegetables to develop new methods for the future of farms in the country.

Kuwait Times: How can your research help to evolve agriculture in Kuwait?

Abdulrahman Al-Fraih: I have recently just begun researching farming techniques in Kuwait. I hope I can provide some options in the future for farmers to grow more sustainably and hopefully incorporate more organic techniques. Previously, I was working on a project collecting and sorting native Kuwaiti seeds.

KT: You have visited several farms around the world for research purposes. What have you learned that will help in developing the industry in Kuwait?

Fraih: There was a farm in Japan that employed people with disabilities and the ones who did not get the opportunity to work got exposed to nature instead of being in a facility. They can go out and do something that is also benefiting them, because they can use their skills. I would love to set up an initiative to help people get out of the house and work with vegetables and involve disabled people more in the society. My future initiative will be well-studied and try to find a facility close to the city, because people will not drive for an hour to farms in Abdaly.

Another organic Dutch greenhouse produces energy and supplying it to the city. They have large generators to create energy for the greenhouse. Any additional energy they send it to the city. We should work on ways to make farms more sustainable. I have a farm in Abdaly, where I use solar panels to control the water pumping system. I want to try to use robots to help with various production tasks and collect as much water as I can. Some farms collect condensation to harvest water.

So far we do not have a problem with energy, but when the prices of energy and water increase, we have to think outside the box. The farm is not only a way to produce, but we also can make it as a means of income.

KT: Do you see a future in organic agriculture in the country?

Fraih: I do see a future in organic agriculture. It may be small at the start, but there is a market for organic products.

KT: How do you hope your research will change agriculture in Kuwait?

Fraih: Since agriculture can be a slow process, seeing my research adopted by farmers will take time, especially as the positives take time to show. However, the journey of agriculture is sometimes a patient one, since plants take a long time to grow. But one can hope some of the ideas can be used to make better-educated decisions, so farmers can choose the best options.

Most projects take time before adoption in Kuwait despite being beneficial to the farmer and the environment because they do not trust them yet. For example, hydroponics is the cultivation of plants without using soil. The system is not new – it has been around since the ’70s. People know the system is more efficient, uses less water and has more benefits, so why has it not been adopted, although it has been researched extensively?

Farming in Kuwait is a hobby to get money from production, but the income only covers their losses most of the time. Farmers are only focusing on the support they get from the government. How soon my idea will be adopted will depend on the farmer. I work with my team on research on agroforestry, which is a technique to utilize the different aspects of trees and plants (combining trees and shrubs with crop and livestock farming systems). The study will take years to be implemented to set the future of farming in Kuwait – it is more about giving people options.

The weirdest thing in Kuwait is that a lot of people like to reinvent. There is a lot of research on how the greenhouse is set up. It has been used since the ’60s, but people in Kuwait tend to do it their way without any proper methodology. So they end up with a unique greenhouse that is much worse than how we are supposed to use it.

Greenhouses use a cooling pad system to bring down the temperature. The whole idea is to get cooler temperature for the plants depending on the thickness of the cardboard and how the air goes through it to cool it. But here they use palm leaves instead of cardboard and saltwater, which doesn’t serve the purpose.

KT: How does planting help in limiting climate change in Kuwait?

Fraih: Planting trees can play a small role in climate change, since they are capable of sequestering carbon or reusing waste and producing compost that can be used to increase the productivity of plants and reduce landfills.