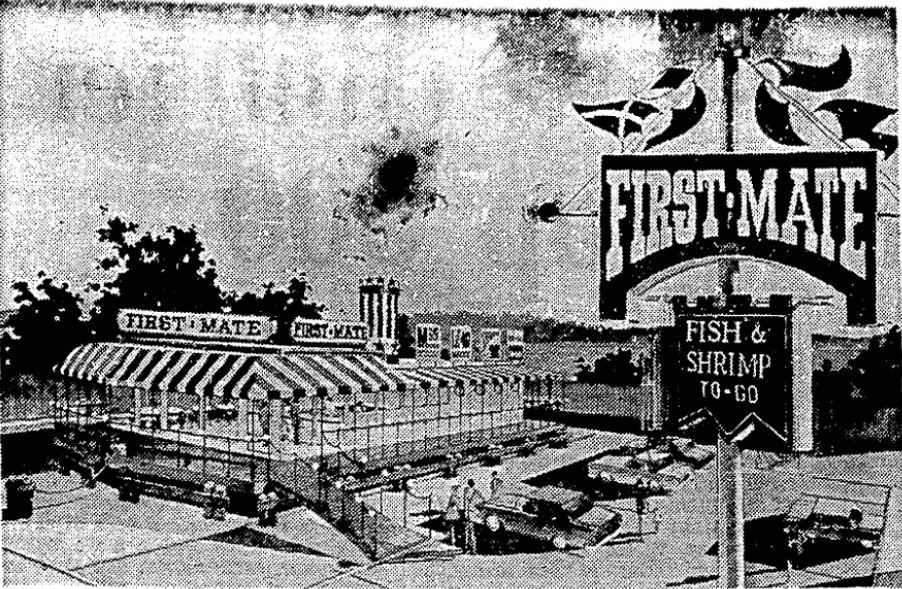 Over five decades ago, San Antonio furniture man Jay S. Honigblum had the most unlikely idea. He believed that San Antonians were secretly hungry for fish.

The civic appetite of the old Cow Town was already entrenched from decades of Mexican food.

But Honingblum had this hunch, which for a short time in the 1970s proved to be a smashing success: San Antonians also wanted deep-fried fish and shrimp.

Honigblum built a restaurant resembling a riverboat at Buena Vista and South Zarzamora streets, hired cooks and a crew, and on April 6, 1970, opened the hatches of “First Mate.”

The first restaurant looked like an “updated river barge” painted red, white and blue, according to a San Antonio Express story.

The 10-foot smoke stack “emitted steam in conjunction with lights flashing the three theme colors,” the newspaper reported. “To enter the building, customers had to walk up a gangplank. Sound from the ‘ship’s’ horn will blast every so often.”

Fifteen months after the first restaurant opened, First Mate had five stores and a processing plant in San Antonio. The chain — which served fried fish, corn-on-the-cob, shrimp gumbo, fried pies and strawberry shortcake — planned to have 10 stores in the Alamo City by fall 1971 and was working to expand to Houston.

In the early days, the chain brought a steady supply of fresh and saltwater fish and oysters inland from Port Aransas and Galveston.

By 1975, the chain’s menu expanded to feature Southern fried chicken with “flavors to cluck about” and a submarine sandwich worth “diving into,” according to an advertisement in the San Antonio Express.

Dubbed the “landlubber specialties,” the expanded menu was meant to be a “great tasty alternative for landlubbers and sealubbers alike,” according to the ad.

By September 1977, First Mate had closed all ten seafood restaurants in Alamo City and gone out of business.

Ray Ellison, the company’s financial advisor, told reporters that they closed because they were not making enough money to satisfy the chain’s owners.

Years after First Mate closed, other nautical-themed restaurants in San Antonio and South Texas opened, including Spanish Galleon, a seafood restaurant designed to resemble a large, multi-decked ship used by Spain in the 16th and 17th centuries.

The Shazamily Fights Helen Mirren and a Giant Dragon