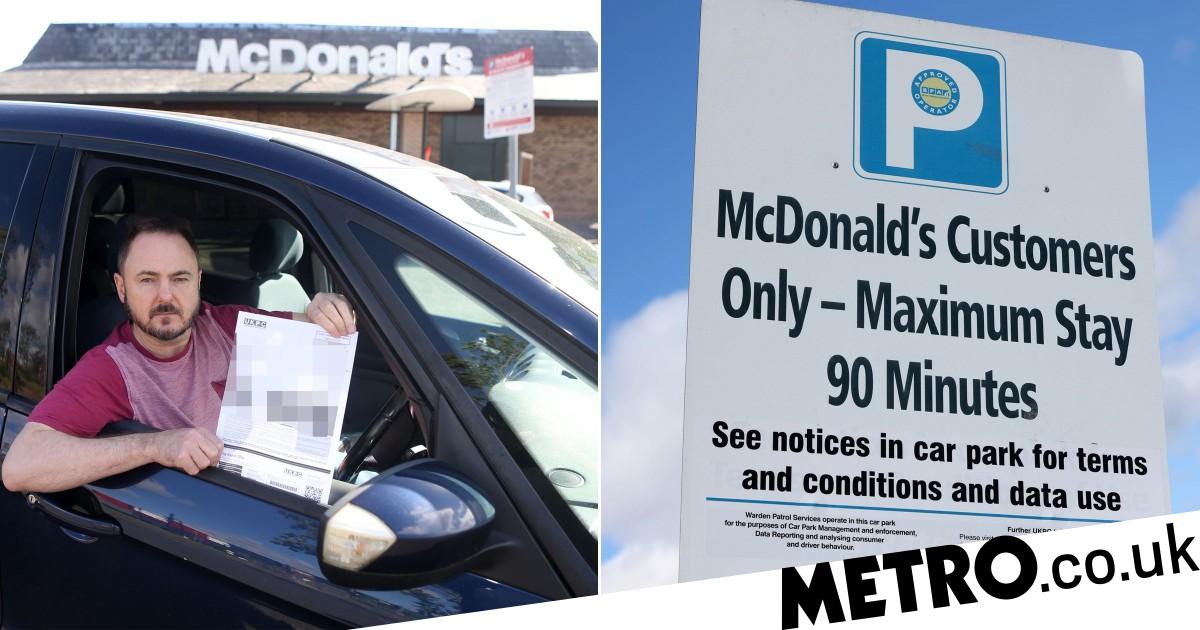 A furious dad claims he was slammed with a £100 parking fine after visiting McDonald’s twice in one day.

Spencer Barclay, 52, visited the fast-food chain in Gateshead before work on June 24.

After grabbing a coffee, he says he drove to his job at Metropolitan House and left his vehicle all day in their free car park.

When he finished at 5pm, he stopped by the same McDonald’s at the Metro Retail Park to buy a Happy Meal for his son, 6.

But the software consultant was stunned to later receive a letter accusing him of parking up at the restaurant for eight hours and 43 minutes.

The cameras had captured images of his Ford Galaxy arriving at 8.25am and leaving at 5.09pm.

He has blasted the fine as ‘absolutely disgusting’ and claims it’s ‘total extortion’.

Demanding to see footage that proves he was parked there all day, Spencer has asked: ‘How many other people have been unfairly treated for going for a happy meal?’

’It’s just blatantly designed to try and get money out of people – it’s extortion! This can clearly happen to anybody’, he said.

‘I think they have got a camera that photographs you but the camera is a snap shot in time.

‘It photographs you coming in and leaving and that’s fine but what if you visit twice? If you visit McDonald’s twice in a day you can get £100 fine – that can’t be right!’

He is yet to receive a reply from the parking company after putting in a complaint – but says he would rather go to court than pay.

‘You’ve got to be a complete moron if you park in that car park and walk to work where there’s a free car park’, he said.

‘My first thought was “how can I prove it”. We have got to put in a system that’s fair – this isn’t fair, it’s total extortion.’

A spokesperson for McDonald’s has apologised for Spencer’s experience, but  said they can’t help him.

‘We are sorry to hear about this customer’s experience. The car park at our Metro Retail Park restaurant is run by a third-party provider and we have made them aware of this issue.

‘We understand that if the customer contacts the provider directly, their case will be considered under the appeals process.’

Get in touch with our news team by emailing us at webnews@metro.co.uk.

For more stories like this, check our news page.

Get your need-to-know
latest news, feel-good stories, analysis and more

Raising the bar: What makes a good bar a great bar?