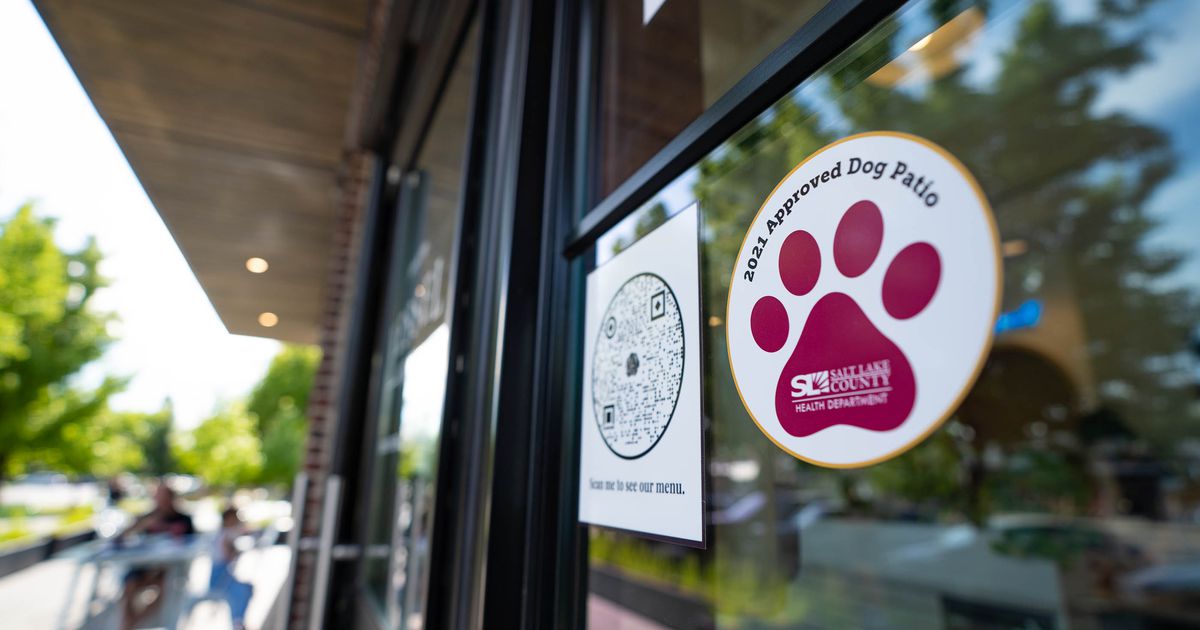 The county health department has given the OK to 38 restaurants, 10 more than last summer.

(Francisco Kjolseth | The Salt Lake Tribune) A sticker on the door at Vessel Kitchen at 905 E. 900 South indicates a patio friendly to dogs during a busy Friday evening on May 28, 2021. For 2022, 38 Salt Lake County restaurants — including Vessel Kitchen — have received approval to allow dogs on the patio while their owners dine outside.

More Salt Lake County restaurants will be allowed to let customers bring their dogs along for patio dining, as a popular program continues to grow.

The county’s health department has approved dog patio variances to 38 restaurants for this year, the department announced Thursday. That’s 10 more than received the variance in 2021.

“When we got a dozen, I thought, ‘That’s pretty good,’” said Nicholas Rupp, spokesman for the health department. “It’s just grown. We had a few more in 2020 than in 2021, which I don’t know if that’s pandemic-related — perhaps the increase this year and 2020 was pandemic-related, too, because we have more establishments creating outdoor patios, or are promoting outdoor dining options in the wake of the pandemic.”

Restaurants must go through a formal application process, and maintain certain sanitation practices. After being approved, the health department gives out “Approved Dog Patio” stickers that restaurants can post on their doors — whether or not they use that sticker, they must put up a sign alerting all customers to the fact dogs will be on the patio.

Restaurants also must provide an outdoor entrance, to prevent dogs from walking through indoor dining areas. They must clean the patio every six hours with non-toxic cleaners, and remove any accidents within 5 minutes. Servers and wait staff are not allowed to touch the animals.

Owners have to keep their dogs on-leash at all times, dogs must have a collar and tags showing current vaccinations, and dogs are not allowed on tables and chairs. They can be given water, but can’t be fed anything at the table — even dog treats. And they are not allowed to lick or otherwise touch any cutlery, glasses or plates.

Though the practice of walking cats on leashes has become more popular, they are not welcome at the restaurants — the license is canine-only.

ADA service dogs are able to access all areas of a restaurant under federal law, but emotional support animals — which are not recognized as service animals — must stay out of the dining room.

Licenses will continue to be added throughout the year. They will be posted on the Salt Lake County Health Department’s website, slco.org/health/food-protection/dog-patio.

Workers stab each other in fight at NC Wendy’s :: WRAL.com