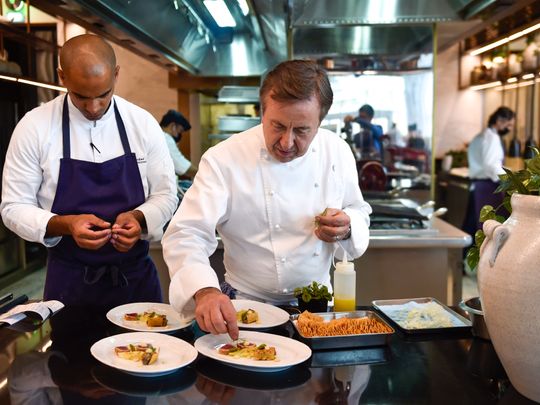 Dubai: His favourite excuse to escape school was helping his grandmother on her farm. Daniel Boulud was only eight when his grandmother started entrusting him with the simple task of turning milk into curd. At that time, little did he know that this cheese making process would ignite his passion for cooking and he would go on to earn two Michelin stars for his restaurants in the future.

Gulf News recently met with the 66-year-old award-winning French celebrity chef in Dubai, who owns over 15 restaurants globally, to find out more about his journey into the culinary arts.

Growing up in, what is famously known as the capital city of French gastronomy, Lyon, Boulud decided as a teenager that he wanted to be a chef.

Looking back, he fondly remembers plucking fresh vegetables like carrots from his grandmother’s farm and making cheese. “It taught me the importance of fresh produce and high quality ingredients as a youngster, and helped me build a connection with food very early in life,” he added.

When he was 14, Boulud’s parents introduced him to a neighbour who was a socialite. This is where his journey into the culinary world began.

“I used to bring eggs, chickens and cheese from my grandmother’s farm to her [the neighbour’s] home and she happened to know all the best chefs in Lyon. As soon as my parents told her I wanted to be a cook, she said she would look for the best restaurants,” Boulud said.

And so she did – she introduced him to the top chefs in the city.

In 1969, Boulud earned his first experience working in a kitchen under Chef Gérard Nandron, at the two-Michelin star restaurant Nandron in Lyon. Then the list of various Michelin star kitchens he has cooked in only grew from there.

“Before I came to the US, I worked at various restaurants in France, with two and three [Michelin] stars and also got to work around Europe including Denmark,” he said.

Making French food in the US and around the world

Making his way out of Europe, Boulud wanted to continue the legacy of authentic French cuisine in the US and around the world.

In 1981 he relocated to the US and 12 years later, Boulud started his first French restaurant in New York.

In 1998, his restaurant, named Daniel, earned him a Michelin star for the first time. Later, he successfully went on to open several eateries in Canada, Singapore and the UAE.

Inspiration from the past

While chefs across the world started experimenting with fusion cuisine and other cooking methods, Chef Boulud stuck to traditional cooking styles. His aim was to maintain authentic French taste in his cooking. For inspiration, he said; “I always turn to the past.

“I am very nostalgic. I never thought like many other chefs that ‘oh I will be an avant-garde chef’. I always look back for inspiration, I will never be that chef who is always trying to make something new.” But, Boulud added that while he sticks to flavours of the past, his technique “surely evolves”.

“Food is about memories. You can tease people with it and people will come back for more,” he said.

Speaking about his personal memories with food, he said that he enjoys cooking for his children and family.

“In my country house just outside of New York, I cook a lot for my family and the dishes I make depend on the season,” he said.

Giving us a glimpse into what a homemade meal by an award-winning chef consists of, Boulud said: “I enjoy huge salads with over 20 ingredients in the summers. These usually include ingredients such as vegetables, tuna, olives with a lovely pesto or lemon dressing made with cured lemons.”

Whereas, his go-to wintertime ingredients are hearty vegetables paired with different cuts of meat such as veal and beef. The chef treats his family to special dishes with ingredients such as truffles and foie gras on the holidays.

Sticking to his love for traditional cooking, one of his favourite dishes to make is vol au vent, a puff pastry-based French dish with a filling of meat or seafood with sauce.

And, if you are inspired to make this dish, here are a few elements to keep in mind as per Boulud: “It’s a very versatile dish, which requires a lot of focus on technique. Fifty per cent of the taste is in the sauce and the other half goes into making the puff pastry perfectly flaky.”

While cooking techniques and traditional recipes are of prime importance to Boulud, the transition from becoming a cook and a chef to owning and managing restaurants was a tricky task that required a different set of skills.

Team work and dedication are key

So, what does it take to become a successful chef and restaurateur? According to Boulud, it’s a combination of qualities that makes it work and it’s not as easy as it might seem.

“Many I have cooked with moved on to other things as years passed. It’s not an easy path. Some didn’t have the ambition, drive, passion, dedication and energy,” he said.

Sharing what he learnt during his nearly three decades of experience as a restaurateur, Boulud said: “Team work is key.”

“Being trusted all the way by your team, suppliers and customers is most important,” he said.

Speaking about what is important while managing a team, he added: “They [restaurant staff] must feel safe and have constant opportunities to grow.”

Boulud manages a team in Dubai as well at the Brasserie Boulud, a French brasserie which serves contemporary cuisine, taking inspiration from traditional cooking styles.

The chef deems Dubai a “food curious” place, where people are willing to try various cuisines.

He also attributes the UAE’s geographical location as a great bonus to those looking to start an eatery here. “In Dubai, we are between Europe and Asia. We benefit from both market supplies, while also getting supplies from the Middle East,” he said.

“Dubai has an amazing representation of world cuisine. My aim here is to give people a French taste. At the same time, I am American and that shows through in my cooking, so there’s no cookie cutter way of doing things,” he said.

At his restaurant, Boulud gives his customers a taste of France while incorporating local ingredients into his cooking. Certain shellfish, fish and organic vegetables grown in the UAE are used in his menu, which includes everything from duck confit to crustaces et crudites, a seafood-based dish with lobster, shrimp and king crab.

Boulud is also a fan of fresh produce and tries to use as many locally grown ingredients in his cooking as he can. Grains, sesame seeds, fruits and vegetables such as eggplants zucchini, squash and watermelon are used at his restaurant.

Do you have a topic you would like us to feature? Write to us at food@gulfnews.com