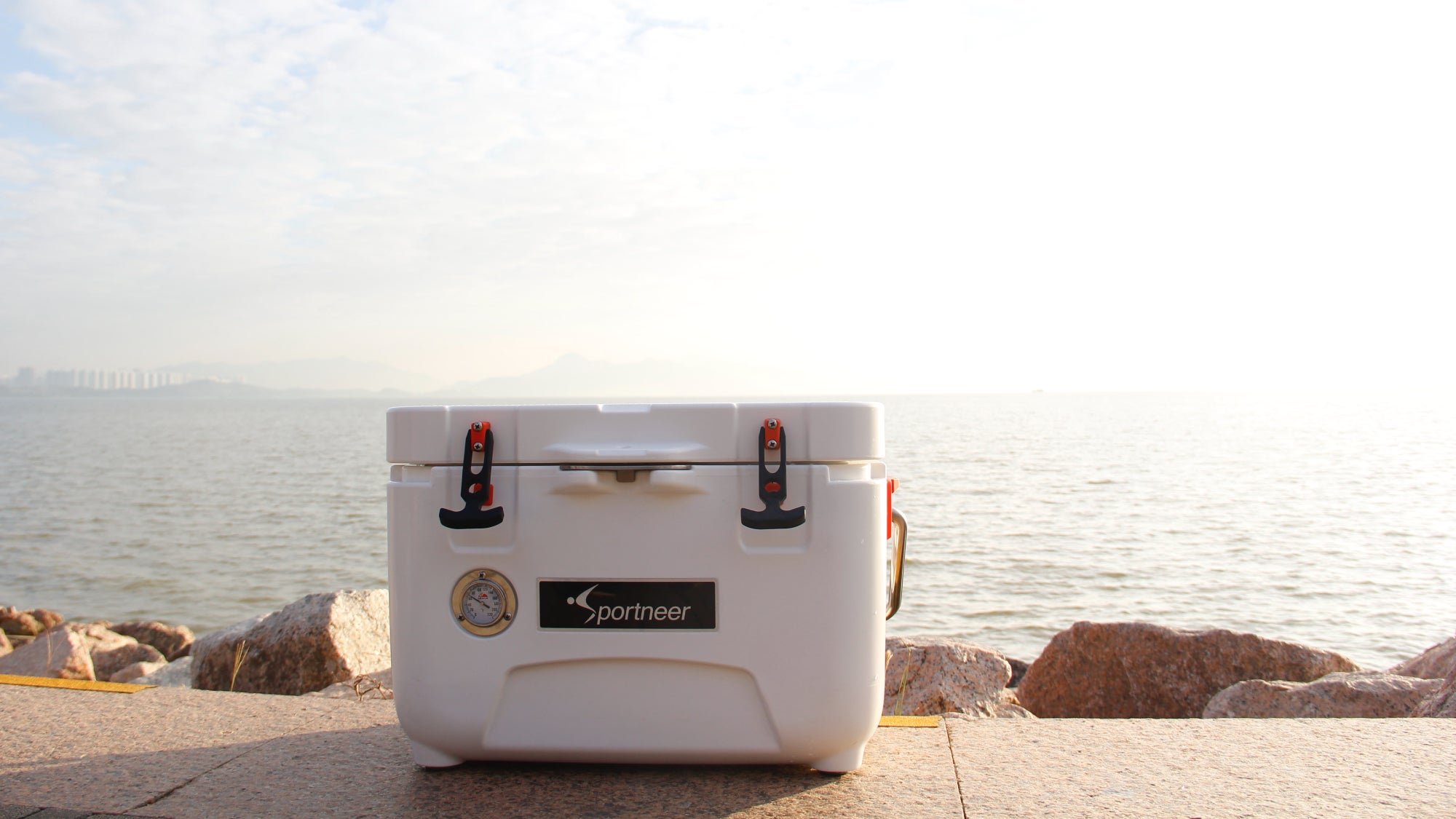 The Fourth of July holiday might be primetime for eating, drinking, and hanging out, but every summer weekend has the potential to reach legendary levels of chill. All those good vibes can melt away in an instant, though, thanks to one poorly packed cooler.

As tempting as it may be to just toss your sausages and frosty beverages into an insulated box with some ice, a little planning and the right stacking strategy will help your food and drink stay cold longer. You’ll also stymie bacterial growth, which the Department of Agriculture says occurs rapidly between 40 and 140 degrees Fahrenheit (4 to 60 Celsius). And a weekend marked by legendary levels of bacteria is one you’ll remember for all the wrong reasons.

We know you’re here for the best way to pack a cooler—one cooler—but our first recommendation is to use two coolers. Bear with us—there’s good rationale for doubling up. Simply put, you want one cooler for drinks and another for food.

Anyone who’s attended a summertime party knows guests dip into the drink supply far more frequently than they poke around in the refrigerated food. It might only be the cook who touches that. Every time you open a cooler, warm air gets in, so storing sodas with steaks means your meat could go bad a lot faster than it would in a designated portable meat locker. A warm Coke is one thing—uncooked room-temperature chicken is another.

Make sure you have the right cooler

The best cooler for your trip is the one you can stuff to its limit, leaving as little empty space as possible. You want as much heat transfer as possible inside your cooler to happen between the ice and your goodies—you don’t want precious ice chilling random air. Your main consideration will be size: use one you can fill to at least a third of its capacity with ice, with the remainder reserved for food or drink.

We say one third of your cooler’s contents should be ice because many major retailers (like Yeti and Canyon) recommend a 2-to-1 ratio of food or drink to ice. The easiest way to visualize this is to divide your cooler into thirds and ensure your provisions fill two of them. Just don’t pack it like that—we’ll get to the proper packing plan shortly.

Beyond that, you can use whatever cooler you please. Naturally, newer coolers will feature the latest insulation innovations, and our reviews team has weighed in on what they consider to be the best coolers of the year, if you’re into that. And maybe consider a white one because it’s likely to absorb the least amount of heat. But if you like the one you’ve had for years, who are we to tell you to throw it out? We will note that if you have two coolers with different insulating qualities, use the better one for food and the worse one for drinks—as usual, this choice comes down to food safety.

Freeze your own ice or buy the coldest you can

If you have enough lead time, it’s best to freeze your own ice. As long as you have water, you won’t have to worry about running out, and you can make the cold stuff work for you in ways you might not be able to if you buy a sack of ice from the store.

[Related: On the origin of ice cube trays]

And don’t just make cubes—make larger chunks too. Freeze trays, bags, and bottles of water, the last of which can serve as extra hydration at the end of a particularly scorching day. These ice blocks have less surface area than an equal volume of cubes or crushed ice, so they’ll melt slower: the more surface area ice has, the more space heat has to soak in and turn it into water. Ideally, you should make one block that’s the same dimensions as the bottom of your cooler and maybe 1 to 2 inches thick, so you can stack food and drinks on top of it. Just don’t try to freeze water inside your cooler—that could crack it.

Understandably, not everybody has the time or desire to start an industrial ice-making operation in their home. Instead, try to find the place near you that sells the coldest ice. Sure, water turns into a solid at 32 degrees (0 Celsius), but ice can get colder than that. A commercial freezer is likely to crank out cubes chillier than anything you can craft in your kitchen. A final note about dry ice: we don’t recommend it because it’s not as easy to come by and can be dangerous. If you do get your hands on some, follow all the proper precautions, the most basic of which include wearing gloves and sticking it at the bottom of the cooler so it’s unlikely to contaminate any food or drink.

Once your cooler is clean and ready to go, stash it in the coolest place you can until you’re ready to pack it up. Maybe that’s a shady spot outside your house, your basement, or inside a freezer, but you want to avoid pulling a cooler straight out of a hot car or steamy shed and immediately stuffing it full of ice and goodies. The warmth from the cooler will seep into the cold stuff inside and you’ll waste ice cooling the cooler. Not ideal. Keep the cooler on ice (or as close as you can get), however, and the summer heat will have to work through cold insulation before it even touches what you’ve got inside.

Prepare your food and drink

Before you pack your cooler, you’ll want to get rid of as much dead weight as you can. That means preparing food in advance so it’s essentially ready to cook or eat right off the ice. Get rid of packaging too—don’t waste ice chilling some plastic you’re going to immediately throw in the trash when you get to your party spot.

Freeze what you can, too, because a frozen burger patty is just as good as a block of ice when it comes to cooling things down.

The more intelligently you pack your cooler, the less you’ll have to disturb its contents, and the less heat you’ll introduce into that refrigerated environment. We recommend starting with a base of ice or reusable ice packs, and we highly recommend you do so by dropping in a block of ice that fits snugly into the bottom of your cooler.

On top of this cold foundation, you’ll want an insulator of some kind, at least in your food cooler. While you’re discarding packaging, save some cardboard—it’s lightweight and fairly good at resisting heat. You could even consider a thin piece of wood, which is less likely to get soggy and is a relatively good insulator that’s easy to find. If you have something better that’s food-safe, by all means, use it. For bonus cooling, chill this material with your cooler beforehand. Not only will this unmeltable layer ensure a solid base and an extra barrier for heat to break through, it will keep food from slipping into the icy meltwater depths to be ruined forever.

[Related: The world’s worst conductor could be a game-changer in the climate crisis]

From there, think about what food or drinks you’ll want to access last and put them at the bottom. The primary exception to this rule is uncooked meat. You should store it in watertight containers so it can’t leak everywhere, but if you don’t have those, stash it at the bottom so its juices can’t contaminate other food. Another exception is delicate food—even if you’re going to cook the hot dogs last, don’t bury the buns under pounds of ice and other stuff. They’ll be crushed.

As you go, try to pack everything in layers and fill all empty space with ice. Remember what we said above: the less air there is in your cooler, the longer everything will stay cold. And if you want to get really intense about cooler packing, separate everything by category and create a map of what you’ve got going on inside your portable icebox. If it’s clear where everything is, you and your guests won’t have to rootle around with the lid open as much.

Finish with a cold cap

Once your cooler is stuffed to the brim with ice and goodies, fill the last bit of space under the lid with something cold. We think the best choice here is a reusable freezer sheet, because these ice packs are flat and thin, easily serving as a second lid. If you don’t have some of those, reusable ice packs are a good secondary option because they also tend to be uniformly flat and are larger than ice cubes (surface area always matters). Regular ice will do the trick too, but it won’t last as long as our preferred options.

Stay cool out there this summer, and may your drinks stay frosty too.

Man arrested in Italy after threats to adulterate food products