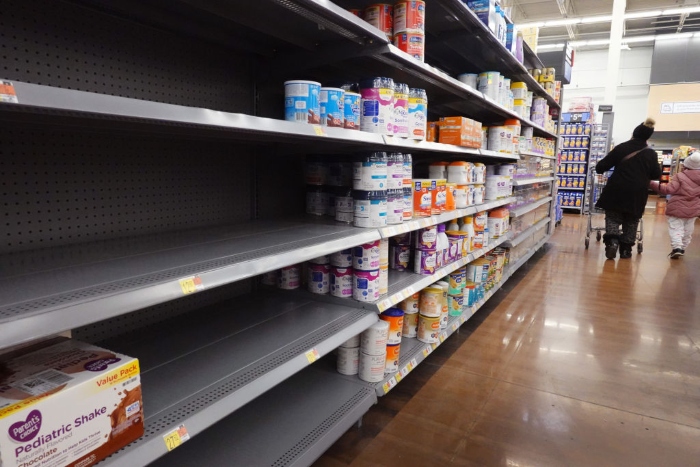 Carter has been urging parents and caregivers to contact members of Congress to put pressure on the government to help fix the dwindling supply by facilitating production at another facility. Carter and her sister set up a website to get caregivers organized last week and has already gotten over 4,000 visits.

“If, God forbid, a family member of President Joe Biden or Jeff Bezos or someone influential had one of these diseases, this crisis wouldn’t have made it to Day Two,” Carter said. “Because no one understands this issue and knows it’s happening, there’s no hope for us — that’s how it feels.”

The Abbott Nutrition plant in Sturgis has been essentially shut down since mid-February, after FDA inspectors launched an investigation of the facility in response to complaints that four infants who had consumed formula made there had been hospitalized with Cronobacter sakazakii — a rare bacterial infection that is particularly deadly for young babies. Two of the infants died.

The FDA has said it found serious food safety violations at the plant, as well as five different strains of Cronobacter, though none of the strains matched the two illnesses for which federal officials have genetic fingerprints of the bacteria. The findings have raised questions about how rigorous FDA inspections are — the agency had been in the plant for a routine inspection months earlier and found nothing serious enough to warrant regulatory action. POLITICO also recently reported that a whistleblower had contacted top FDA officials with specific allegations of food safety concerns in October — months before the infant deaths were reported to the agency.

Still, it’s not clear why the plant is still shut down nearly three months after the recall. Neither FDA nor Abbott will answer specific questions about the status of the investigation or what the plan is to reopen the facility, which has further strained the infant formula supply chain. Among other types of infant formula, the plant is a major producer of Similac, the top brand on the market. Parents across the country have posted on social media about near-empty shelves of formula at the retail level, and though it appears these incidents are sporadic and regional, it’s disconcerting for caregivers and can lead to panic buying.

The retail data on the infant formula shortage varies. A custom analysis by Datasembly found that over the past two weeks, the out-of-stock percentage for baby formula nationwide increased from 31 to 40 percent.

IRI, another data analytics company that pulls information directly from retailers, found that the average in-stock rate is currently about 79 percent across the U.S. — far below the pre-pandemic norms of 95 percent, but not critically low.

The most urgent concern is the supply of amino acid, or elemental formulas — a class of product that serves a smaller slice of the population, but is often an important, if not the sole source of nutrition for children and adults with special medical needs.

POLITICO has received several tips from parents panicking about supply. Caregivers report that national pharmacies and medical supply companies, which typically distribute these special formulas, are simply out of stock or are down to such limited stocks that the shipments are extremely unreliable. Some caregivers are running dangerously low on supply, with just a few days left.

A coalition of metabolic patient organizations led by MSUD Family Support Group and PKU News recently asked how their communities are coping with the shortage. They got back more than 50 messages full of alarm: “Please help us. We are in a place of desperation,” wrote one parent.”

“I cannot begin to explain the stress that accompanies the fear of running out of a product that is essential for the brain health of my children,” the parent continued. “I have been in a panic over this shortage.”

The FDA is aware of the situation. The agency on April 29 publicly announced that it had told Abbott that “the agency has no objection to the company immediately releasing product to individuals needing urgent, life-sustaining supplies of the specialty and metabolic formulas … on a case-by-case basis.”

It is not clear when FDA first told Abbott they could supply some types of formula from the plant. Abbott phone representatives have been telling parents for weeks that FDA has been holding back formula that may have been made during the period of the recall and that’s why supply they have on hand hasn’t been able to go out. The FDA disputed that claim.

“The FDA has not delayed the release of any specialty and metabolic infant formula products and the agency strongly disagrees with this characterization of events,” an agency spokesperson said in an email. “The agency has been working with Abbott since the Feb. 17 recall on ways to resume production.”

“These are complex discussions, but from the beginning the agency has been committed to making these infant formula products, including specialty and metabolic products, available again as quickly as possible,” the spokesperson said, adding that they couldn’t provide specific details on those conversations.

A spokesperson for Abbott did not answer POLITICO’s questions about when the agency told the company it could release formulas under certain conditions, but the company is currently working to release some formula products if health care providers request it.

“We opened a special phone line on Friday to field requests from patients for the metabolic nutrition formulas,” the spokesperson said this week. “We’ve also been engaging with doctor groups and health care professionals. We’ve received dozens of inquiries and are coordinating with metabolic centers and healthcare professionals to fulfill requests based on need and on a case-by-case basis. We understand that every patient who relies on these important products has critical needs and we are working diligently to provide product as needed.”

In a recent budget document, FDA asked Congress to consider giving the agency new authorities to help prevent this type of situation from happening in the future. The agency noted that “no law requires manufacturers of infant formulas or essential medical foods to notify FDA when they become aware of a circumstance that could lead to a shortage of these products.”

The agency would like to see a requirement that companies notify the agency if there are anticipated interruptions.

Metabolic, gastrointestinal and allergic disorders, which affect thousands of Americans, can be extremely sensitive to manage. Anxiety and depression are common among individuals with these conditions. A change in formula could send someone to the hospital or into psychological distress.

“Children, babies and adults throughout the world are suffering because of this,” said Karen Reznik Dolins, a dietitian and adjunct faculty member at Columbia University and other universities, whose 28-year-old daughter has MSUD. Dolins is on the board of MSUD Family Support Group, which helps families navigate life with the disorder.

There are several complex diseases for which these specialty formulas are life-saving.

In Carter’s son John’s case, he relies on formula for 100 percent of his nutrition. A flare-up of his disease (EoE), from an allergic exposure, can cause debilitating pain lasting for days or even weeks, Carter explained, through tears. After all treatment options had failed, John was put on an amino acid formula — where proteins are broken down into their most basic form — and it put his disease into remission within two months, Carter said.

Carter said she’s been told that this one Sturgis plant manufactured something like 75 percent of all amino acid formulas in the U.S. (Abbott declined to comment on market share or production statistics). Abbott’s Michigan plant made EleCare Jr., which dominates the amino acid formula market. The recall and plant shutdown led to a run on other brands — including John’s prescription brand, Neocate, made by a company called Nutricia — and there just isn’t enough overall supply to keep up.

When customers go to Neocate’s website, they arrive on a landing page that indicates the company’s supply is very strained. In a recent message to caregivers, the company said the Abbott recall and the search for replacement formulas has “created unprecedented demand for amino acid-based formula products.”

“While we are taking urgent measures to get more products into the market, current product availability is low and, in some cases, you will see that our products are out of stock,” the statement continued.

Before the recall, families say they didn’t experience any supply disruptions with amino acid formulas.

“I’ve never seen anything like this ever in my career,” said Leah McGrath, a dietitian who works for a retailer, but has been speaking out about the shortage on behalf of the group Build Up Dietitians. McGrath said she’s been getting increasingly alarming messages from pediatric dietitians who are desperately trying to find their patients the formula they need to live.

“If babies are not getting what they’re supposed to be getting, or they’re getting less than, or there’s just the trauma of switching back and forth to different formulas, this has really long term implications in terms of their health and their growth and development, as the first 1,000 days of life are known to be the most crucial,” McGrath said.

David Lim contributed to this report.

Where do sports drinks stand in a growing functional beverage market?