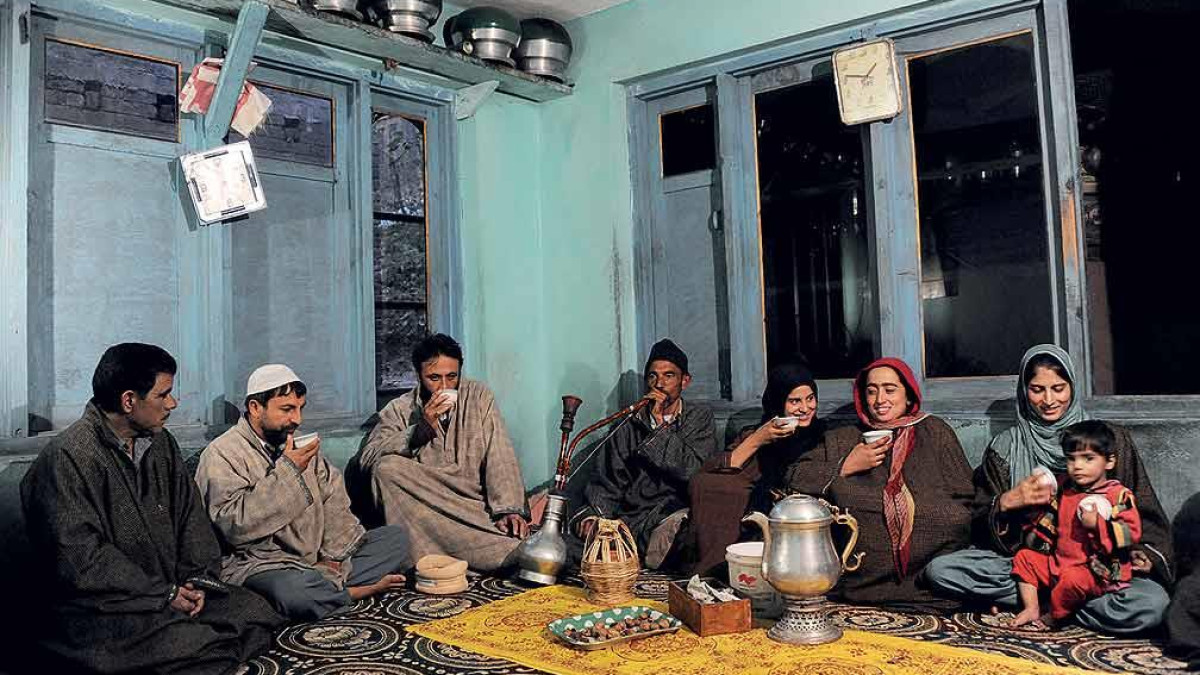 At a time when it is difficult to enjoy even a sip of hot tea in sweltering Delhi heat, Kashmir is a perfect place to enjoy cups of ‘chai’, courtesy Kashmir’s cool environment and pleasant weather.

In an age, when world is dynamic, Kashmir runs at its own pace, which many find sluggish. But it keeps moving on, despite the region caught in an unending political turbulence.

Kashmir’s beverages too are unique with different aroma and taste where one only finds, ‘Kashmiriyat’ —love and affection. The people of Kashmir are considered connoisseurs of beverages, particularly ‘Nun Chai’ and ‘Kehwa’. ‘Nun Chai’ or pink colored Kashmiri tea is made from tea leaves, milk, salt and baking soda. ‘Nun chai’ means salt tea. Majority of Kashmiris drink ‘Nun Chai’ at breakfast and during evening. It is relished with ‘choet’ (bread), tschewoer (bagel) or soeth.

Similarly, ‘Kehwa’ is also relished in Kashmir, and over the years it has become synonymous with the region. The classic Kashmiri beverage is made with a blend of cardamom, sugar, cinnamon, saffron and pecks of almonds or walnuts. Many even add honey instead of sugar to this beverage for health gains.

Both the beverages are traditionally made in huge copper kettles, known as ‘Samovars’. However, over the years ‘Samovars’ are found only in large congregations or occasions including weddings, deaths, birth or any familial gatherings. However, the fast-paced life has not held some families, particularly in rural areas to prepare ‘Nun Chai’ and ‘Kehwa’ in ‘Samovars’.

In Kashmir, these two beverages also reflect the mood of the occasions. For instance, if there is an occasion of marriage, guests are served with ‘Kehwa’. At the mourning or funerals which have been unending in Kashmir since 90’s, trays with cups of ‘Nun Chai’ can be seen going around.

The beverages particularly ‘Kehwa’ has got some innovations with people blending it with milk. ‘Doodh Kehwa’ (milk Kehwa) is served to first time guests as mark of respect, usually on occasions of marriage ceremonies. In majority of the Kashmiri households ‘Shangri Kehwa’ containing liquorice root is given if one catches cold, catarrh or sore throat.

‘Nun Chai’ is said to have originated in Kashmir, when its only connection with the rest of the world was through Silk Route. Many historians believe Kashmir’s ‘Nun Chai’ has Yarkand connection, the city in Turkistan. A similar kind of beverage known as ‘Atkan chai’ is made with salt, milk and butter in the region.

Some link Kashmir’s connection to Turkistan with the region’s king Rinchan Shah embracing Islam at the hands of Sayed Sharafuddin Shah from Kashgar, Turkestan. Rinchan Shah after reverting to Islam was named Sultan Saddruddin Shah.

The beverages of Kashmir also find a way into its spirituality. In Kashmir, ‘Samovars’ or kettles of ‘Nun Chai’ or ‘Kehwa’ can be seen brewing at its shrines and khanqahs.  At most of these shrines on 11th day as per Islamic calendar, cups of ‘Nun Chai’ with flecks of coconut and Kashmiri bread are relished by the devotees. There have also been instances in the past where many ‘peers’ (seers) or qalandars also used to drink several cups of ‘Nun Chai’.

The ‘Samovars’ brewing with ‘Nun Chai’ have also found a way into gatherings of ‘sufi music’. All night people would listen to songs praising Creator over cups of ‘Nun Chai’.

However, this tradition was severely hampered during the 90’s when guns rattled in the Valley. After a routine of crackdowns and encounters, such occasions have become a rarity and now uncommon in Kashmir.

The love of Kashmiris for ‘Nun Chai’ is such that usually after coming from outside to the homeland especially via road, the first preference is to relish with ‘Nun Chai’. Realizing this appetite for ‘Nun Chai’, a long chain of hotels along Srinagar-Jammu highway serve ‘Nun Chai’ to quench this thirst of Kashmiris.

‘Chai’ in Kashmir has also found its way into its politics. The term ‘Chai’ is often used to cool tempers in Kashmir or sometimes to reconcile or simply to keep hopes spirited. Many a time, politicians offer ‘Kehwa’ at functions to penmen and lensmen simply to reflect their Kashmiri credentials. However, at times the gestures have turned wayward.

One such occasion was in 2016, when the then Chief Minister of J&K Mehbooba Mufti after being bamboozled by hard-hitting questions by journalists, was left fuming. Later, agitated Mufti seemed to have realised her blunder and tried to pacify the situation saying: “waen chayeew chai cupah (now let’s have a cup of tea).

In 2010, Alana Hunt an Australian writer, while on a trip to Kashmir, felt pained by the region’s turmoil. She went on to write about the region through her memoir ‘Cups of Nun Chai’.

During 90’s, when militancy was at its peak in Kashmir, purchasing more morning bread for ‘Nun Chai’ meant the host is having militants at his home. Many a time, a host would give an impression that he has ‘mehmaan’ (guests) at home.

‘Chai’ in Kashmir also means money, whether one is forced to give it or simply willing to give some bucks out of happiness. On occasions such as birth, buying a new car, house or any big accessory, a person offers ‘chai’ to a worker or helper.

The aroma of ‘Kehwa’ in Kashmir is best felt through ‘shirmaals’ (special oven made crispy bread). ‘Nun Chai’ lovers’ delight is Kashmir ‘kulcha’. In Kashmir’s north belt, particularly Baramulla is considered the best place to buy mouth-watering ‘kulchas’ which has some best making bakers in the business. There are also parts of downtown Srinagar, which have got expertise in making this Kashmiri ‘kulcha’.

The appetite for best bread has also given some names to bakers inspired from Bollywood. One such famous name in Kashmir is ‘Hema Malini’s Shirmaal’, the shop in south Kashmir’s Pampore. The place is also famous for its saffron laden karewas.

In Bollywood ‘Kehwa’ is also showcased to reflect Kashmir. The latest was in Vishaal Bhardwaj’s ‘Haider’.

‘Nun Chai’ is considered Kashmir’s very own, dating back to centuries. Historically, Kashmir before accession to India would use ‘macheran’ (herbal carrot like ingredient) to prepare ‘Nun Chai’ instead of now used tea leaves from north east Assam or Darjeeling.

“It was until 1955 that Kashmiris, particularly villagers, used to drink macheran chai,” reminisces Kashmiri satirist and poet Zareef Ahmad Zareef.

Kashmiris after having sumptuous ‘Wazwaan’ meal gulp cups of ‘Nun Chai’ to digest the volumes of meat.

Earlier, Kashmiris used to mostly use mountain salt or Pakistani salt to prepare ‘Nun Chai’. However, after ‘salt drought’ in Kashmir during 1947 to 1952, sea salt from the mainland India was used in the tea.

In 2013, a study by International Journal of Case Reports and Images, said that Kashmiris love to drink ‘Nun Chai’, since it is known to have digestive properties because of the sodium bicarbonate content. However, they cautioned that high salt concentration in ‘Nun Chai’ could increase the risk of gastric cancer.

However, throwing caution to the winds, Kashmiris relish ‘Nun Chai’ that has been their companion in unending grief.

Oregon’s hotels and restaurants are finding their footing, at last