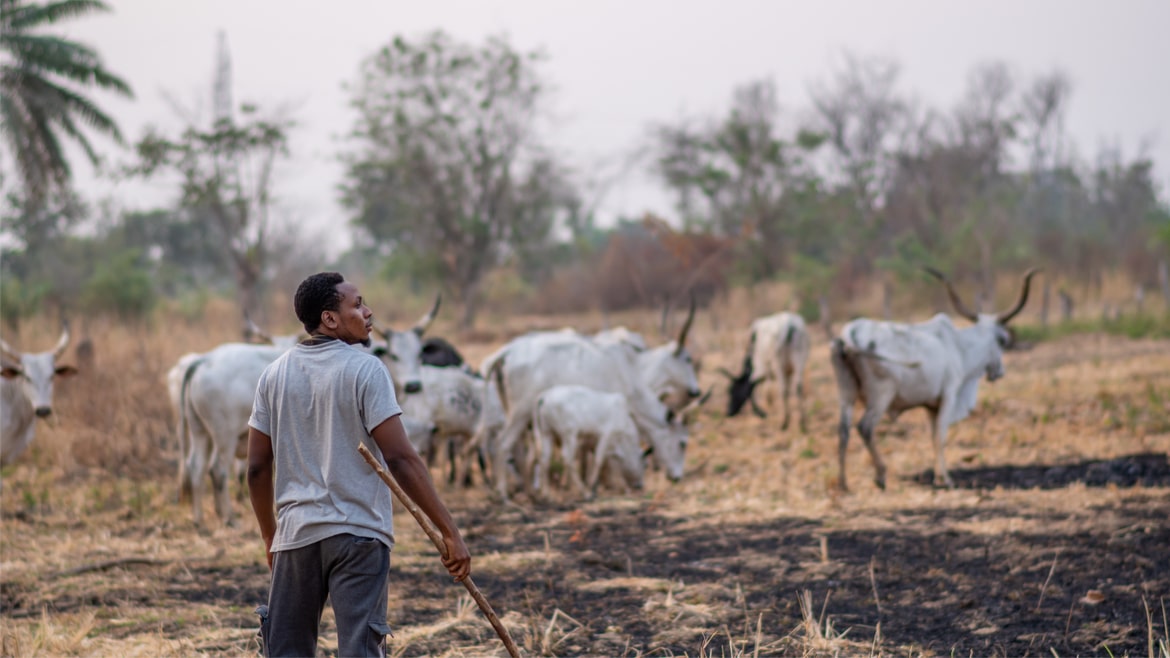 Pastoralists in the Sahel are adapting to the impacts of growing insecurity and climate change through extended periods of migration. Ayodele Majekodunmi argues, however, that increased pastoral mobility also leads to greater risks of zoonotic disease spillovers. Climate change, conflict and disease present a triple burden in Nigeria, requiring an equally sophisticated policy response.

This article is part of the series “Rethinking zoonoses, the environment and epidemics in Africa”, which examines the effect of changing relationships between human, animal and environmental health on epidemic risk.

The views expressed in this article are those of the author and do not necessarily reflect the views or policies of the FAO.

Zoonoses exert a huge burden through their impacts on human and animal health, as well as livelihoods, food safety and food security. In Nigeria, where the zoonotic disease burden is one of the highest in the world, this negative impact is further compounded by conflict and climate change.

Nigeria, Africa’s most populous country, also has one of the largest livestock populations on the continent, contributing 9% to agricultural GDP. The pastoral production system plays a key role in the livestock sector, which comprises over 15 million pastoralists and 82% of cattle. Due to the central role of livestock, pastoralists are particularly vulnerable to the health and economic impacts of zoonotic diseases.

Historically found in the Sahel and Savanah ecosystems of West Africa, there have been successive waves of pastoralist migration southwards into the sub-humid and humid zones. Notable southward shifts have been spurred by droughts in the 1970s and 1980s and severe farmer-herder conflicts in the sub-humid zone from 2000 onwards.

Climate change has also played a role. Nigeria is among the most vulnerable countries in the world, experiencing increased temperatures, variable rainfall, desertification and extreme weather events such as floods, droughts, sandstorms and heatwaves. Variable rainfall in particular is pushing northern Nigerian herders further south, where there is a longer rainy season and more abundant vegetation. Insecurity is an additional push factor displacing pastoralists, including farmer-herder clashes due to natural resource conflict, armed banditry and Boko Haram and ISWAP terrorism.

Despite rich natural resources in the sub-humid Middle Belt of Nigeria, increased human and animal populations and cultivation of land have led to natural resource conflict between herders and farmers. During the dry season when resources are scarce, pastoral access in their home villages is restricted to marginal areas by dry-season irrigated farming. In the rainy season, when resources are abundant, the fear of cattle trampling crops is a significant obstacle to pastoralists’ grazing rights. Farmers fear losing their crops and its associated income to trampling, while pastoralists fear punitive compensation payments and expulsion from the area. There is a desire to avoid animosity on all sides. Thus, cattle are expected to leave on wet season transhumance once crops are above ground. Consequently, throughout the year, pastoralists are either restricted to marginal areas or forced into transhumance to maintain their herds.

Most pastoralists now spend nine months every year on transhumance instead of the customary three-month dry season migration. Increased movement requires additional hired herders to supplement family labour. This can take up to 54% of expenses, compared to just 17% spent on veterinary care.

The Middle Belt is an ethnically diverse transition zone between the mainly Muslim North and Christian South. These changes in natural resource management have therefore taken place against a backdrop of rising political and religious conflict. Armed robbery and cattle rustling have also risen in the wake of violence and insecurity. While it is very difficult to quantify the economic impact of these conflicts, it has been estimated at over US$400 million a year across the region.

These changes to pastoral mobility and production have significant effects on zoonotic disease transmission in the country. Long distance movements, for example, tend to introduce disease into new areas. This is exemplified by Nigerien pastoralists driven south by desertification who are implicated in the introduction of anthrax across the border into Nigeria.

Incursion into the southern forest zone results in increased exposure to disease vectors such as ticks and tsetse flies. Greater contact with wildlife (rodents, bats, pangolins, etc.) further raises the transmission of diseases such as Ebola, Lassa fever and rabies. It also heightens the risk of new and emerging zoonoses spilling over from wildlife into human and livestock populations.

Restriction of pastoralists to marginal areas has further accelerated local population densities, leading to increased vector contact and disease transmission rates. Longer transhumance means more time spent in close proximity with livestock and isolation from society. As a result, pastoral families are split for longer periods where the absence of cattle means less milk is available to support children’s nutrition and women’s income. Herders are consequently more prone to risky behaviours such as consumption of raw milk, increasing transmission of brucellosis and tuberculosis. They also have reduced access to both veterinary and medical services.

Pastoral mobility driven by conflict and climate change clearly has negative effects on the transmission of zoonotic diseases in Nigeria. This puts additional strain on the country’s weak surveillance systems and One Health coordination across veterinary and public health sectors.

Efforts to combat the triple burden

The government’s National Livestock Transformation Plan (NLTP) aims to address these issues in a holistic manner – encompassing human and animal health, food safety and peace and conflict resolution. It includes multiple initiatives such as livestock identification to strengthen disease surveillance and food traceability, ruminant value chain development, including hygiene and welfare compliant slaughter and processing of meat and leather, as well as monogastric value chain development for pigs, poultry and micro-livestock.

Of particular relevance to pastoralists are the linked initiatives for rehabilitation of existing grazing reserves, pasture management and dairy collection centres. These aim to limit pastoral mobility by providing secure land tenure, sustainable livestock feed and a ready market for pastoral products in priority production zones. In addition to improving food safety and security, this will go a long way to reduce the negative effects on conflict and zoonotic disease transmission and make it easier to manage the effects of climate change.

45th Annual Scholarship Drive Supports Emerging Female Leaders in Food, Beverage and Hospitality to Date Over 1,000 Recipients Have Received Over $2 Million in Funds