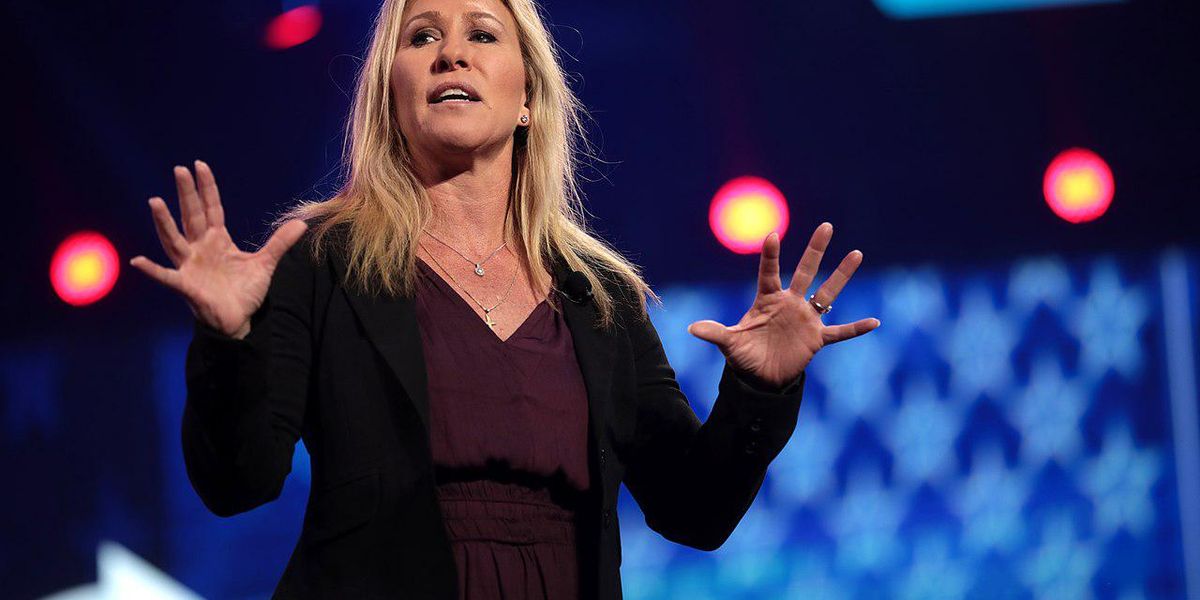 Some say the Republican Party has gone nuts. In reality, they’ve simply reached the endpoint toward which they’ve been moving for 62 years: fascism.

Republican politicians since Barry Goldwater’s 1960 campaign have trash-talked “big government” in the United States. Like Reagan’s assertions that cutting taxes on rich people would “trickle down” benefits to poor people, or his claim that destroying labor unions would increase take-home pay for working people, this one’s just another lie.

Since the 1980s, in fact, the GOP has been the ultimate “big government” party. And now we’re learning that Republicans in Congress were, just three days before Joe Biden was to be sworn in as president, calling for the ultimate big government power: martial law to prevent Biden‘s inauguration.

There’s no provision in either the Constitution or US law for a president to specifically invoke martial (or, as Marjorie Taylor Green calls it, “Marshall”) law, although a series of statutes under Sections 251-255 of Title 10, passed between 1792 and 1871 and generally referred to collectively as the Insurrection Act, can produce the same result.

They give the president extraordinary powers, allowing him to shut down or seize control of communications systems like cell phone providers or social media companies, freeze or seize the assets of individual citizens or organizations including nonprofit corporations like political parties, and to create a federal police force he can deploy nationwide that is answerable only to himself.

(If all of this sounds familiar, it’s almost step for step what Hitler did; we remember its most famous artifact, the Schutzstaffel or SS.)

And that’s exactly what members of the GOP’s Insurrection Caucus in Congress were asking President Trump to do as recently as January 17th, 2021, all to keep Trump in power for another four years.

Making it all even more shocking, this newly-revealed coup attempt happened months after Joe Biden won the election, the states and Congress had certified that win on January 6th, and the world was preparing to welcome Biden to the White House at noon, January 20th.

The Big Lie isn’t just that Trump had an election stolen from him: the GOP has been running a longer con, preparing the ground for Trump, for three generations.

When they started, it was just another grift. But now it has built a strong foundation for martial law and fascism in the United States should another Trumpy Republican win the White House.

It was 58 years ago that Barry Goldwater proclaimed:

I remember this ad playing on my parents’ black-and-white TV during that 1964 election contest between Goldwater and Lyndon Johnson:

The GOP’s proclaimed opposition to “big government” was a lie then, and it’s a lie now. They’re quite happy to both expand and use government, so long as it’s used to benefit themselves and their rich friends.

It’s been, however, a very useful lie for Republicans:

Small government was never the goal of the Republican Party or the conservative movement. It was always all about raw political power and the wealth that comes with it.

The Trump presidency finally and for all time pulled the mask off their “we oppose big government” lie. There is no conceivable way a government could be “bigger“ than for it to establish martial law.

The truth is that Republicans only oppose “big government” when it restricts their ability to make obscene amounts of money at the expense of working people. Or when government tries to help out the environment, those who’re down on their luck, or the victims of historic discrimination.

Republican advocates of “small government,” in addition to trying to pull the ultimate big government trigger of martial law in January of 2021, now also brag that they want to use the power of the governments they control to:

And now we find that a sizable number of congressional Republicans actually wanted Donald Trump to end democracy in America once and for all, replacing our system of checks-and-balances with a strongman oligarchy.

Marjorie Taylor Greene, for example, texted Trump’s Chief of Staff Mark Meadows that she’d talked with other members of Congress and they agreed that:

“[T]he only way to save our Republic is for Trump to call for Marshall [sic] law” and the President should pave the way for her and her colleagues, who’d already incited an insurrection, to now “go after Biden and anyone else!”

And Republican Congressman Scott Perry was calling on Trump to replace the attorney general with a toady who would void the election by declaring it fraudulent.

All this was still going on just three days before Joe Biden was to be sworn into office and move into the White House with First Lady Dr. Jill Biden.

At the same time the Sedition Caucus was doing their work, the Trump Administration itself was outright refusing to participate in handing government agencies over to incoming Biden administration officials.

Over at the Pentagon — the agency Greene and her colleagues wanted Trump to use to overthrow our government — Trump loyalist Kash Patel was reportedly blocking the normal handover processes that precede a new president taking over.

As Courtney Kube and Carol E. Lee reported for NBC News a month before the constitutionally scheduled January 20th transition:

“A Trump loyalist who was recently appointed as Pentagon chief of staff is controlling the Biden transition’s team access to Pentagon officials, even blocking some career officials and experts from giving information about key defense issues to the transition team and telling political appointees to take the lead instead, say two current and two former U.S. officials.”

As you can see, Trump and his fascist followers have no problem breaking both custom and law to seize and hold power. They nearly got away with it in 2020, and might have if they had been able to follow Marjorie Taylor Greene’s advice.

Such an order by Trump may have provoked demonstrations, incited riots across America, or possibly even triggered a civil war.

In the end, a group of patriotic Americans, most of them Republicans, succeeded in blocking Trump’s plans. We’ll be learning more about them as the January 6 hearings go public this summer.

Trump- and insurrection-supporting Republicans should be in court for sedition, rather than pontificating about “big government” on Sunday talkshows.

But the GOP still has the plan in place, and could easily use this fascist “big government” strategy to seize control of our government to declare martial law in the future, unless Congress acts.

As the past six years have shown the entire world, Republicans won’t be satisfied until the American government is big and oppressive enough to keep them in power indefinitely.

And that’s regardless of how elections go, regardless of who tries to vote, and with the ultimate power — if future elections don’t go their way — to simply sic the US Army on the people using the martial law powers Representative Greene was so enthusiastic about on January 17TH.

From Your Site Articles

Related Articles Around the Web

The Must-Try Beverages and Drinks of Greece