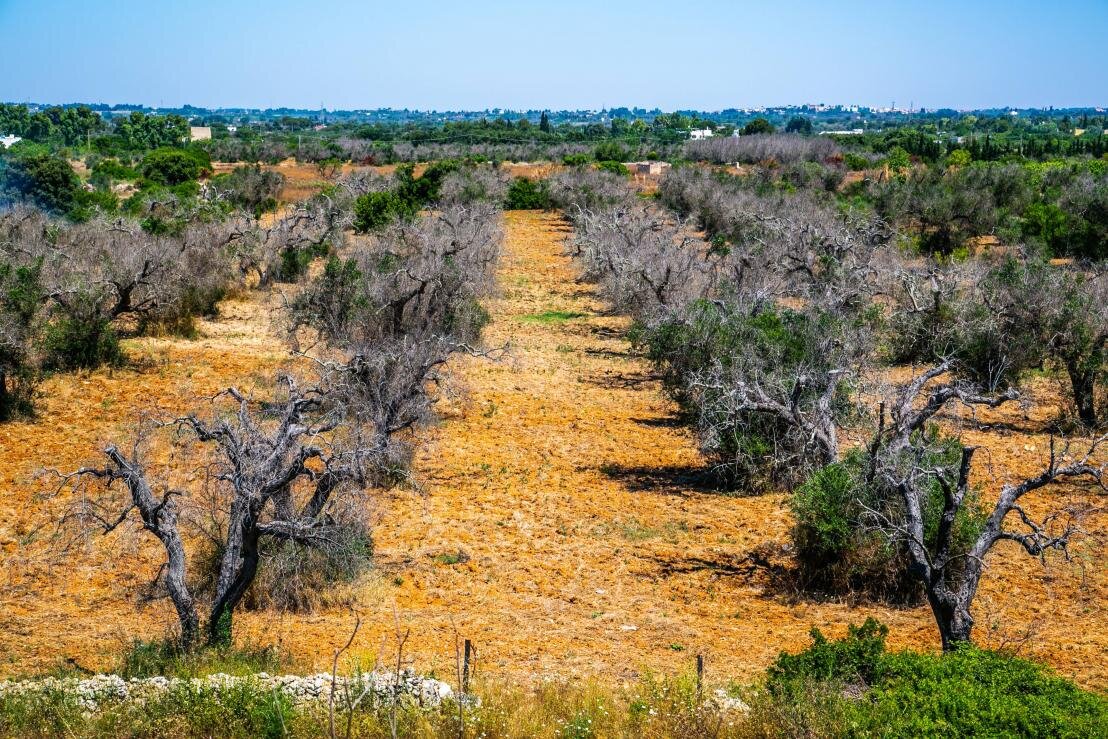 Some vitally important European crops like vines and olives are being devastated by disease. Scientists are searching for biological replacements for chemical pesticides to improve crop and human health.

The threat to agriculture from invasive species is huge. The United Nations (UN) estimates that plant disease costs the world’s economy over €200 billion per year, with 20–40% of crop production lost to pests.

“The economic loss from invasive species is immense, and if we took no action, there would be a huge amount of food insecurity, not only across the EU but across the globe,” said Dr. Hikmate Abriouel, professor of microbiology at Universidad de Jaén in Spain’s Andalucía.

With the stakes so high, it’s easy to understand why the agricultural sector is one of the largest users of chemicals worldwide.

The question of food security is uppermost these days. But, as Dr. Abriouel goes on to explain, our growing reluctance to use chemicals in agriculture adds a layer of complication to farming.

“There was a time when it was normal to rely on powerful pesticides to treat agricultural land,” she said. “But now we know that a chemical designed to kill a living organism is likely to have negative impacts on other biological systems too.”

Spraying crops with synthetic compounds has adverse impacts on people, farm animals, wildlife, pollinators like bees and other living things that play an essential role in the ecosystem. The chemical runoff also damages the land and water.

Pesticide pollution causes risk to farmland from the chemical residues that leach into water supplies.

Some synthetic pesticides have been linked to human diseases like cancer, diseases of the immune system and respiratory illnesses.

Farmers who work with pesticides are particularly vulnerable to side-effects, with an estimated 44% of farm workers worldwide experiencing at least one incident of acute pesticide poisoning every year.

The EU’s Farm to Fork (F2F) strategy for sustainable food production targets significant reductions in the use of chemical pesticides, fertilizers and antimicrobials and supports an increase in organic farming. Sustainability goals mean biopesticides or biological alternatives to pesticides are required.

“There is a lot of evidence that replacing chemicals with biopesticides works with nature rather than against it,” said Dr. Abriouel. Biological solutions benefit soil health and biodiversity too.

In France alone, around 12% of vineyards were unproductive between 2012 and 2017 due to Grape Trunk Disease (GTD) which has been spreading across Europe over the past two decades. A chemical pesticide used to treat vines was banned because it is harmful to human and environmental health.

The disease results in 50% less productive plants, a decrease in the quality of the wine and the premature death of healthy vines. Worldwide, estimates for the replacement cost of grapevines exceed €1.4 billion per year.

As a response to this blight, the EU is funding the multinational BIOBESTicide project which aims to find a biological solution to GTD.

“Our aim is to produce a really effective, totally natural preventive solution to this very serious and very expensive problem,” said Dr. Assia Dreux-Zigha who works for the French biotechnology company Greencell and is coordinating the BIOBESTicide research.

The team’s research is focused on a specific strain of Pythium oligandrum—a “friendly” fungus that is naturally present in the rhizosphere of many crop plants, including vines. The rhizosphere is the microorganism-rich region of soil directly around a plant’s roots.

P. oligandrum works both by destroying parasites directly and by inducing plant resistance against further attack. After isolating P. oligandrum in the lab, Greencell and its partners found that under certain conditions, the biopesticide colonized the roots of vines and stimulated the plant’s natural defenses against GTD.

In the near future, following trials and safety approval, the BIOBESTicide researchers aim to scale up and field-test their biopesticide in vineyards across different geographical areas.

“This is a very challenging project but, when we finish in late-2023, we hope to have a solution that will make it possible for vine plants to survive for their entire natural lifecycles,” said Dr. Dreux-Zigha.

Undoubtedly, winemakers will raise a glass to this prospect.

A second iconic European crop urgently in need of a biopesticide solution is the olive. First detected in European olives in 2013, Olive Quick Decline Syndrome (OQDS) is the disease caused by the bacterium Xylella fastidiosa.

In Puglia, southern Italy, where Xylella first surfaced on the continent, olive production shrank by 65–80% in the years up to 2020 with the loss of an estimated 100,000 jobs and the destruction of 400-year-old heritage olive trees.

Xylella has surfaced in France, Spain and Portugal, spread by an insect called the spittlebug. Affected plants are infected from the roots upwards, causing the leaves to turn brown and eventually killing the plant. It is considered one of the most dangerous plant pathogenic bacteria in the world.

“The problem with this pathogen is getting worse,” said Dr. Abriouel, who supervises the EU-backed SMART-AGRI-SPORE project, which aims to develop a biopesticide based on bacterial spores.

“Preventing further spread of this pest is a priority in the EU,” she said. A 2020 study estimated that as a worst-case scenario, Italy alone stands to lose between €1.9 billion and €5.2 billion over a 50-year period as a result of OQDS.

A number of projects are developing biopesticides to attack Xylella. Principal researcher Dr. Julia Manetsberger under the supervision of Dr. Abriouel is focused on modifying a strain of another bacteria to render it deadly to Xylella.

The researchers are hopeful that by 2024, a viable biopesticide will emerge from this research.

“We can’t use something against Xylella that changes the biodiversity or destroys or increases the resistance of microorganisms present in other plants and soil,” said Dr. Abriouel. “In other words, we can’t solve one problem and create another.”

“We are working hard to reach this objective,” said Dr. Manetsberger, “These plants are so important for our economy and we need to defend them.”

Citation:
Organic pesticides to provide natural protection for endangered crops (2022, May 2)
retrieved 2 May 2022
from https://phys.org/news/2022-05-pesticides-natural-endangered-crops.html

This document is subject to copyright. Apart from any fair dealing for the purpose of private study or research, no
part may be reproduced without the written permission. The content is provided for information purposes only.

Bristol one of UK’s most expensive places for students