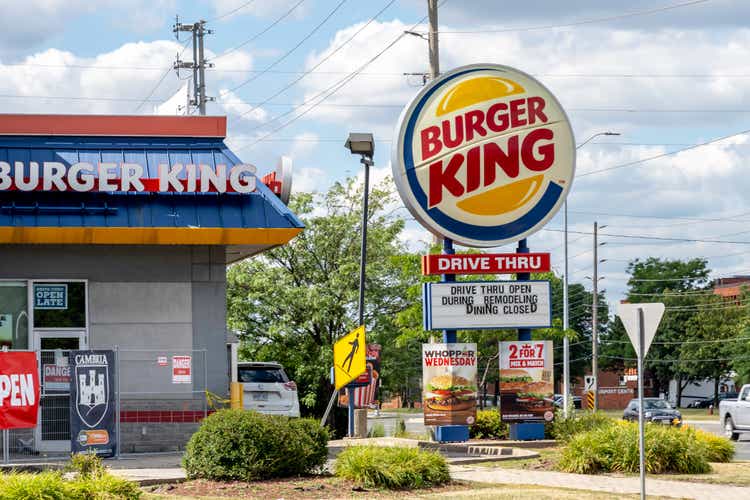 Inflation has become a very hot topic in recent quarters, and readers have no doubt been thinking a lot about the kind of stocks that could hold up well in such an environment. Broadly speaking I would look for three things: high profit margins, low capital intensity, and, from an investing perspective, a relatively high shareholder yield.

Restaurant Brands International (RBI) (NYSE:QSR) ticks at least a couple of those boxes. The company owns the Burger King, Tim Hortons, Popeyes Louisiana Kitchen and Firehouse Subs brands, with its practically 100% franchised estate affording it high margin revenues and relatively low capital expenditure requirements. That’s not to say the company is totally immune from the current economic climate; it is sensitive to the health of its franchisees, whose margins will be coming under pressure from cost inflation. On top of soft underlying performance in its domestic Tim Hortons and Burger King businesses, that could at the very least be a headwind to near-term growth.

The business model is attractively simple: RBI typically receives anywhere between a 3% to 6% cut of gross weekly sales depending on the brand and jurisdiction, with franchisees also on the hook for a one-off upfront fee at the start of their agreements and upon renewal. Obviously that frees RBI from a lot of the day-to-day costs of running a restaurant, while stores that are leased or subleased from RBI are done on a “triple net” basis, meaning that tenants are on the hook for all of the costs associated with the real estate.

For Tim Hortons North American operations, the company is also in the manufacturing, supply and distribution business, albeit the economics of the franchised estate still result in strong company-wide levels of profitability and free cash flow.

Although RBI is positioned at a more profitable point of the value chain, it is of course still sensitive to what’s happening at the restaurant level. That’s ultimately what drives demand for its franchise agreements after all.

With that, things have been a bit of a mixed bag here, with RBI’s two biggest brands, Burger King and Tim Hortons, having struggled a bit in their domestic markets, the United States and Canada respectively. At Burger King, domestic comparable sales growth has been pretty soft, clocking in at 2.5%, 1.4% and 1.7% in the three years proceeding COVID (to strip out the noise from the pandemic). Just by way of comparison, McDonald’s (MCD) – Burger King’s most obvious direct competitor in the hamburger space – saw domestic comparable sales growth average around 180bps higher over the same period.

Soft domestic performance aside, inflation is also going to prove a challenge here, at least indirectly. RBI’s fee-based earnings stream obviously shields it to a large extent compared to company-operated businesses, but it’s still going to show up at the restaurant level and therefore with broader franchisee health.

For some evidence of the above, look at Carrols (TAST). Carrols is a big franchisee, operating just under 1,100 RBI restaurants in total (the vast majority of which are Burger Kings). Its stock has been smoked recently, falling around 75% this past year as restaurant-level profitability has been hurt by higher costs and contracting margins (adjusted restaurant-level EBIDTA fell 40% year-on-year in Q1).

Although RBI’s profit stream is largely fee-linked, weakening restaurant-level economics does suggest that growth might prove sluggish in the near term.

As I said above, RBI is a pretty straightforward business. Its earnings stream is linked to the system sales generated across its brands, which can ultimately grow via increased restaurant sales and/or by bringing more restaurant units into the system. In terms of the former, Burger King and Tim Hortons have had their domestic issues, albeit better performance abroad and faster growing Popeyes have helped drive better overall company-wide performance. Over the mid-to-long run I expect low single-digit annualized comparable sales growth, in line with historical levels.

The bigger driver for growth is going to be restaurant count. Pre-COVID, management was targeting around 40,000 global restaurants by 2027-2029. Call it an annualized growth rate in the 5% area. Combined with low single-digits from comparable sales growth, that would tentatively be good for overall growth in 7% per annum area.

Restaurant count growth noticeably stalled during 2020, understandable given what was going on in the wider world at the time, while recent events and their impact on input cost inflation could similarly delay the growth story. Q1’22 net restaurant growth was solid, increasing 4.4% year-on-year, though I think expansion could be at risk in the near term as franchisees struggle with their existing businesses.

Although the above is a slight cause for concern, it’s not like RBI stock is all that expensive, trading at circa 17x and 15x FY22 and FY23 EPS estimates respectively. Discounting long-term high-single-digit per annum free cash flow growth gets me to a fair value in the $55-$60 per share area, suggesting some upside from the current sub-$50 quote, while the $0.54 per share quarterly dividend is currently good for an attractive-looking yield of 4.3%. Buy.

This Weekend, Indulgence In Delicious Seafood With These 7 Fish Recipes