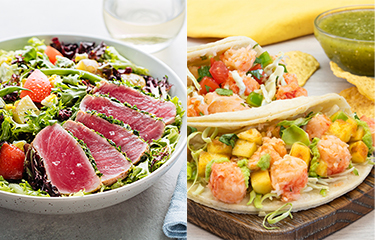 With a dip in restaurant traffic due to inflation, many United States restaurants are offering special seafood menus and dishes to shore up sales for the summer.

Food inflation and rising costs caused the average price of a foodservice meal to increase 9 percent in April compared to April 2019, according to the NPD Group. That price hike coincided with a 4 percent dip in restaurant visits in April.

Full-service meal prices rose 8.7 percent and take-out costs are up 7.2 percent over the last 12 months, according to Consumer Price Index data.

“Rising prices put pressures on consumers that contribute to the restaurant industry slowdown. For many consumers, it’s more affordable to eat at home,” NPD Food Industry Advisor David Portalatin said in a press release. “This is when operators need to demonstrate their value to consumers struggling with inflation and be solutions-oriented to help consumers meet needs across life stages.”

However, consumer spending at restaurants rose 1 percent in April due to inflation, NPD Group found. And industry experts are bullish on restaurant sales this year due to consumers’ pent-up demand.

To spur interest in dining out, many independent restaurants and restaurant chains have upped seafood offerings for the summer, and many are offering seafood at a favorable price point.

“We are always drawing inspiration from coastal flavors, and we enjoy seeing guests embrace those flavors, especially when the temperature starts rising,” Vice President of Culinary Innovation Mike Gieseman said in a press release.

“The flavor-packed Mango Shrimp Street Tacos are the perfect menu item for those with an adventurous palate who crave a bold, elevated experience all at an incredible value,” Taco John’s said in a press release.

Another restaurant chain focused on value-conscious diners is Chili’s Grill & Bar, which recently debuted a “3 for Me” promotion. Guests can order customized meals that include a non-alcoholic drink, appetizer, and entrée, starting at USD 10.99 (EUR 10.46). The promotion includes new entrees such as Baked Seafood Pasta and Carne Asada.

Irvine, California, U.S.A.-based Pokeworks is teaming up with surimi supplier Aquamar on a limited-time Spicy, Crunchy Surimi Bowl. A portion of proceeds from every bowl sold through the summer “will demonstrate the brands’ shared support for Asian American and Pacific Islander (AAPI) communities,” Pokeworks said in a press release.

“This partnership will not just be represented in top quality surimi and plant-based seafood offerings in the works, but in the ethos and consciousness around their joint support of Heart of Dinner, a non-profit that serves meals to food insecure Asian seniors in New York,” Pokeworks said.