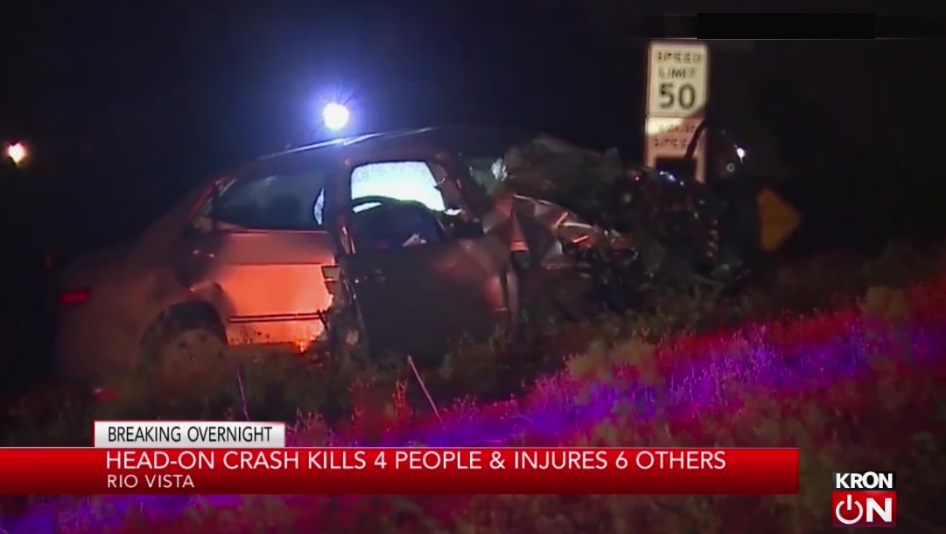 RIO VISTA, Calif. (KRON) — One of the four victims who died in a horrific crash on Highway 12 in Solano County was identified by police Thursday morning.

A 20-year-old driver who, according to investigators, allegedly caused a head-on collision died after he was ejected from a Honda Accord. Two 19-year-old women were passengers in the Honda and were also killed.

Several open alcoholic beverage containers were found inside and around the Honda, according to the Rio Vista Police Department.

The Honda slammed into a Chevrolet Suburban with a family of seven inside. One woman inside the Chevrolet died and six family members were injured.

The collision happened at 8:12 p.m. Wednesday on Highway 12 between Summerset Road and Church Road.

“The investigation thus far has determined the Honda was traveling westbound on SR-12 and veered off the roadway to the right, over-corrected and entered the eastbound lane, colliding with the Chevrolet head-on. The (Honda) driver and rear passenger were ejected from the vehicle during the crash.”

The Honda driver lived in Rancho Cordova, and one of his teenaged female passengers was from Vacaville, police said. Their names will be released after law enforcement officials notified the victims’ families.

“I’ve been working in this county for 26 years and this is the worst crash that I’ve seen,” Rio Vista Police Chief Jon Mazer told reporters at the scene.

The Chevrolet Suburban was packed with seven people at the time of the crash.

“The occupants are Mexican nationals on a one-week vacation in the U.S.,” the Rio Vista Police Department wrote.

One woman in the Chevrolet, identified as Laura Poiret, was killed. Police estimated that Poiret was in her early 70s.

Two girls in the Chevrolet, ages eight and 13, were injured. The girls and four others who survived were being treated for injuries at a hospital as of Thursday morning. The survivors were all listed in stable condition.

Seatbelts utilized in the Chevrolet prevented the death toll from climbing even higher, the police chief said. “The (victim) I spoke to definitely had seatbelt burns, and I have no doubt that saved his life,” Mazer said.

Highway 12 in Rio Vista has a history with major collisions.

“This stretch of highway has been notorious for decades,” Mazer said. Wednesday night’s collision was “particularly bad because we had a small, compact vehicle with three people on board, and a larger SUV with seven people, when they met head-on,” Mazer said.

“People see this wide-open road and there’s not a lot of traffic. So they will get very brave. They will pass, not anticipating traffic coming equally fast. The speed limit here is 55,” Mazer said.

The Rio Vista Police Department said it will not conclude whether the deceased Honda driver was driving under the influence of alcohol until a coroner completes a blood test from his body.

“The Rio Vista Police will not make a DUI determination until Blood Alcohol Content testing results are obtained from Coroner’s Office. But there were numerous open alcoholic beverage containers in and around the Honda,” police wrote.

Hidden Spain: where to stay and what to do off the beaten track | Spain holidays