HCM City (VNA) – Seafood shipments overseas have risen in the first half of 2022, and experts say Tra fish exports can increase the market share in the EU, while that of shrimp has a lot of room for growth in Canada.

According to the Vietnam Association of Seafood Exporters and Producers (VASEP), as of May, the value of frozen Tra fish exports to the EU this year reached 76.8 million USD, up 95% year-on-year. This means the market has bounced back after a two-year downturn due to the COVID-19 pandemic. The Netherlands remains the biggest market in the EU for the Vietnamese products, while positive signals are coming from the shipment of frozen Tra fish to Germany, Spain, and Belgium.

In addition to the bloc, Vietnamese Tra fish exporters have also stepped up their activities in Mexico, Egypt and Thailand.

As of mid-May, Vietnam exports shipped to Mexico are at 45.6 million USD, up 70% year-on-year.

VASEP said the Mexican market accounted for the largest proportion of the value, at 35%, of Vietnamese Tra fish exported to member countries of the Comprehensive and Progressive Agreement for Trans-Pacific Partnership (CPTPP).

Thailand, meanwhile, is a new partner of Vietnam in the sector over recent years, with 60 Vietnamese firms now actively shipping exports to the market.

However, insiders said that the market is good, but raw fish for processing is still in short supply, and the situation is projected to continue until the end of the third quarter.

Regarding shrimp exports, whose value grew 38% annually to hit about 1.8 billion USD as of mid-May, experts have predicted extensive increases from the Canadian market in the time to come. 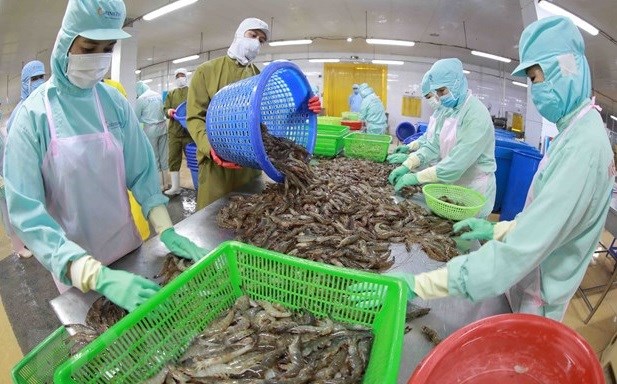 During the period, Vietnam reeled in 100 million USD from shrimp shipments to Canada, up 87% against last year.

Kim Thu, an expert on the shrimp market, said in recent years, Canada has consumed a lot of warm water shrimp from Southeast Asian countries. This is coupled with a reduction in the supply of cold water shrimp; favourable conditions for a good catch in Vietnamese shrimp exports to Canada.

According to her, despite such great potential, when entering the Canadian market, Vietnamese shrimp must compete fiercely with products from the US, India, Thailand, China, and Ecuador. Hence, it is necessary for them to update information and plan specific strategies for better exports in the coming time, she advised./.