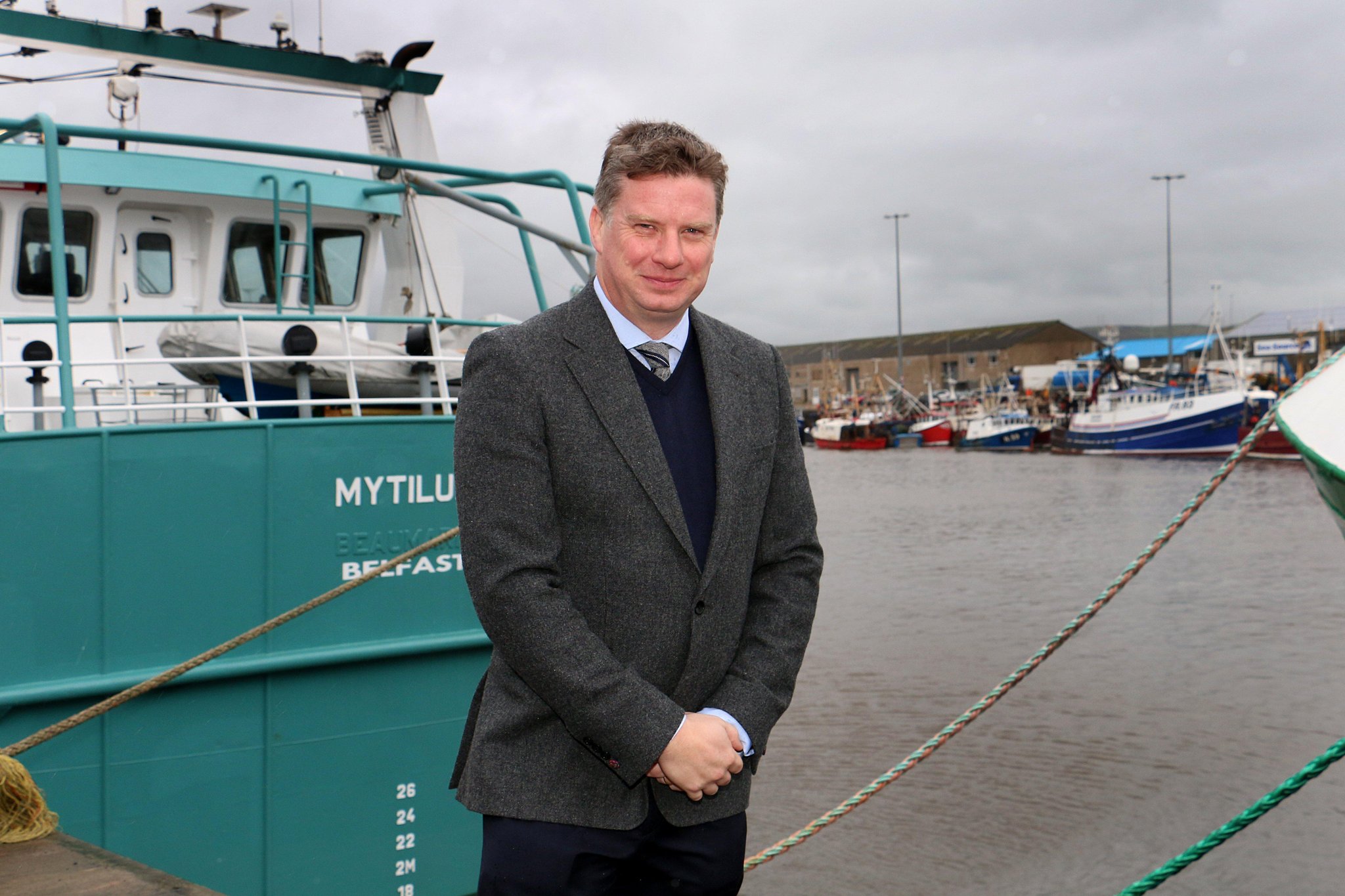 Alan McCulla is chief executive Sea Source in Kilkeel, one of Northern Ireland’s seafood processors, sees the new trails as an mportant development for the industry

Fourteen seafood trails have been arranged in a drive to increase awareness of Northern Ireland’s exceptional fish and seafood industry especially among people here.

The trails, developed by Seafish, the UK body that promotes fish and seafood, are being launched today (Saturday) at a special celebratory event at the iconic St George’s Food Market in Belfast.

The aim is to promote the consumption of locally wild-caught and farmed sustainable seafood that will support the domestic fishing industry. People here and visitors will be able to take a trip to meet producers and enjoy the freshly landed produce at our harbours and ports.

The campaign is in recognition that over 20,000 tonnes of diverse, wild-caught fish and shellfish are landed in local ports every year, most of which is exported and enjoyed overseas – while local diets often tend to feature imported seafood.

Alan McCulla, Sea Source CE in Kilkeel, our main fishing port, explains: “The Northern Ireland Seafood Trails provide a great platform to celebrate the variety of seafood that we have to offer. By exploring the bustling fishing port and harbour towns that feature on these trails, and learning about our rich fishing heritage along the way, families will, we believe, be encouraged to eat more locally sourced, sustainable and healthy seafood, and through this, help our vital seafood industry to thrive.”

And Crawford Ewing, a director of Ewing’s Seafoods in Belfast, recently named NI’s Best Fishmongers, adds: “This is a tremendous initiative on behalf of one of our most important industries. Anything that encourages more people here to find out about the sector and to appreciate the genuine health benefits, in particular, of fish and seafood is to be welcomed.”

Seafood is widely regarded as an essential component in a healthy diets and is at the heart of what has become known as the ‘Mediterranean Diet’ which is seen as contributing to a lower incidence of coronary heart disease. Now it has also been shown by a team of Israeli scientists that people who lose weight on a Mediterranean style diet keep the weight off, unlike people who follow other diets.

Celebrity chef Suzie Lee, who is cooking at the launch, agrees: “It’s not hard to make seafood taste delicious, and it’s a really healthy option for the family. The trails should encourage more people to sample our superb seafood and shellfish.”

Suzie, winner of the BBC Best Home Cook 2020 and host of the highly popular series ‘Home Cook Hero’, is an advocate for fresh, local produce and small-scale suppliers. She is well-placed to celebrate the variety of fish and shellfish available across Northern Ireland.

The trails shine a light on bustling port towns from Kilkeel to Portstewart, and capture a snippet of NI’s huge variety of independent seafood shacks and restaurants, heritage centres and family-friendly activities.

The trails include colourful maps – illustrated by Mourne artist Piera Cirefice – and are designed to guide families on a “harbour-hopping seafood adventure through their chosen trail, from bustling quaysides to the quiet treasure troves of maritime museums”.

Funding has been provided by the European Maritime and Fisheries Fund (EMFF), a government fund providing support for sustainable development

within the fisheries and aquaculture sectors, and are being delivered by SeafishUK collaboration with Mindfully Wired Communications.

Our seafood has long been prized throughout Europe, the US and the Middle East. It can now be found in top restaurants and in retail outlets worldwide. Processors in Kilkeel, Portavogie, Annalong and Glenarm generate around £60 million in sales outside Northern Ireland last year and employ almost 600 people.

Seafood such as oysters, prawns, peeled and breaded, crabmeat and scallops end up in some of the biggest stores in Europe including Carrefour, Auchan and Leclerc in France. Other markets looking to Northern Ireland for fresh seafood include the Netherlands, Denmark, Italy, the Lebanon, Hong Kong and Japan. It’s also an industry with a strong commitment to innovation in the shape of new products including Queenie Scallops and cooked langoustines.

Kilkeel, the biggest seafood port, is a destination in one of the 14 trails

Organic smoked salmon from Glenarm has also been attracting orders from high-end hotels and restaurants in Britain, New York, San Francisco, Hong Kong and the oil rich United Arab Emirates. Glenarm salmon is among the most successful local foods at the iconic Fortnum and Mason food store in London’s Piccadilly.

Probably Northern Ireland’s oldest fish processor Rooney Fish, for instance, sells everything it processes outside Northern Ireland and has become a market leader in shellfish, including prawns, langoustines, mussels, whelks and crabs, sourced from the Irish Sea for customers in Europe and Asia. The company’s Millbay Oysters, which are raised in Carlingford Lough in what is Ireland biggest oyster farm, have won acclaim throughout the UK, Ireland and Europe.