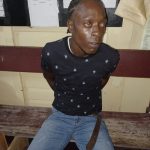 Kaieteur News – The proprietor of BlackWater Tactical Security Firm is now planning to honour three of his security ranks who risked their lives on Saturday by dodging bullets to capture an armed suspect.Eshwar Singh, the owner of the security firm told Kaieteur News that his employees displayed an act of bravery to save a group of foreign nationals from being harmed by two armed men who were trying to rob them around 02:00hrs at Light and Robb Streets, Georgetown.

The suspect moments after being captured

Singh’s company is contracted to conduct patrols around the city to surveillance both government and private properties. During the wee hours of Saturday one of the company’s patrol units, consisting of the three security ranks, was conducting such duties in Alberttown, Georgetown with a vehicle.
After reportedly finishing up a round of patrol, they decided to stop at “Nurse to Burst” – a fast food outlet located on Light Street, to purchase “something to drink.” While stepping out of the vehicle to make their purchase, the security ranks suddenly heard gunshots and decided to follow the sounds towards the corner of Light and Robb Streets.“They investigated and there they saw two men robbing some foreign nationals, they (security ranks) couldn’t say if they (the victims) were Cubans or Brazilians but noted that one of the men was armed and appeared to be shooting wild, wild behind these people,” Singh told Kaieteur News.
Two of the security ranks reportedly alerted their command centre and were advised to chase the suspects while the other returned to the vehicle. According to Singh, the suspects ran in separate directions in an attempt to elude being captured.

The gun found in the suspect’s haversack

The security officers, however, continued the chase despite the men opened fire on them.
“These guys started shooting at my officers,” Singh said.
The chase continued onto South Road where the suspects entered a waiting car and drove off. The security officers called for back-up on their radio and the third security rank decided to cut off the men’s getaway car with the firm’s vehicle.
The suspects reportedly had no choice but to abandon their car and run west along South Road. While one managed to escape, the security ranks zeroed in on the other carrying a yellow haversack on his back.
He ran in a southern direction along Louisa Rowe until he decided to jump a fence. The suspect threw his haversack into a church yard along Cummings Street and then made one more attempt to escape by running back towards Croal Street but the security ranks did not give up the chase and he was finally captured there.
By this time, related Singh, a member of the Community Policing Group (CPG) showed up at the scene with a vehicle and together they cuffed the suspect and decided to retrieve his haversack.
They reportedly opened the bag in his presence and found an illegal gun, a .32 Sig Sauer pistol, along with two spent shells and a magazine.
“My ranks along with the CPG member decided to carry the getaway car, the gun and the suspect to the Alberttown Police Station and hand them over to police” recounted Singh.
At the station, the captured suspect identified himself to investigators as Dexter George, a resident of Timehri, East Bank of Demerara (EBD).
Investigators also found evidence that the car might have belonged to a soldier. In pictures seen by this media house a camouflage cap was seen on the dashboard.
Singh said that he commended his ranks and the command centre for following all Standard Operating Procedures (SOPs) during the apprehension of the armed suspect.
“They could have chosen to fire back at the men but they decided against it because they did not want to be reckless, they were taking into consideration their backstop, which means that they were trying to avoid harming bystanders,” added Singh.
“They did not even use excessive force to apprehend the suspect, he was captured without a scratch on his body,” he continued.
Singh related that he wants to give them an incentive for their brave efforts because if anyone of the three was hit by the suspect’s bullets, the firm would have been mourning the loss of an employee and a family the loss of a loved one.
The acting Commissioner of Police, Clifton Hicken has since lauded the firm’s effort in collaborating with the force to capture the bandit.
Recently, President Mohammed Irfaan Ali announced that his government is seeking to integrate private security firms into the country’s national security plan to assist in fighting crime.
The top cop had also held a recent meeting with the private companies as a step in moving forward with the government strategy to involve them in crime fighting. While Hicken welcomed the idea, he noted that these firms must follow some rules and that is for its ranks to act responsibly and professionally.
Should these companies fail to adhere to such rules, then their licences could be revoked.