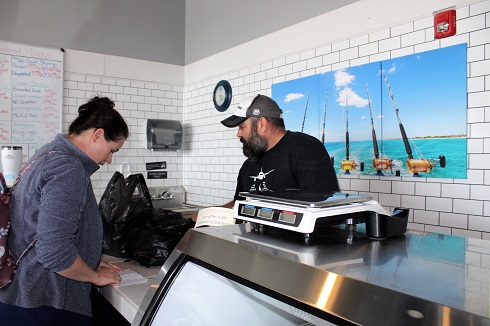 “We do it every day from 11 a.m. through 5 p.m., offering certain menu items. Some weeks, we do something different,” Amy said. “The most popular things – and what we’re sticking to as staples – are crab cake sandwiches – including the crabby melt. We’ve had a lot of orders for it and made it a consistent item. We’ve also had requests for salmon

cakes, which we did in the past, so this week we brought them back.”


Selling prepared foods was part of the business plan when Shrimpy and Snappy’s opened in the fall of 2021.


“When we opened, the holidays were right around the corner and we decided to wait until that all died down and then it was a matter of getting equipment in,” Amy said.


The store continues to evolve.

“We’re now also putting grill packs together. Everything is all packaged and you pick up, take home and grill or bake,” Amy said. “And starting in July, we’ll be doing a seafood boil in the parking lot once a month. People can call ahead, and we’ll cook it and they and stop and pick it up.”

Shrimpy and Snappy’s is also doing some traveling, setting up in other West Virginia cities, this month including Summersville and Spencer.


“We set up the refrigerated van, bring coolers and freezers, etc. and sell fresh seafood,” Amy said. “We try to go to places that don’t have that option close to them. We’re getting the word out and travel to more places.”


The couple still travels to the Carolinas to purchase product, but they do most of their buying – especially of shellfish like oysters, clams, and mussels – in Baltimore.


“Especially with gas prices now, Baltimore is a lot closer and some of the suppliers we met in Carolina ship to the place we go in Baltimore. They cut it up there and we can pick it up. It’s a little less processing for us that way,” Amy said. “We go to the Carolinas every now and then to get shrimp. We meet her in the morning, and she comes with her shrimp off the boat. We stock up on other fish when we go down there.”


Popular from day one has been salmon, Amy said.


“We learned our opening week that people wanted salmon. We hadn’t bought enough of it and we ran out,” Amy said. “Scottish salmon has been the most popular. And this week, we bought king salmon, caught out of the Copper River.”

Shrimpy and Snappy’s is located at the Marketplace Plaza on Jerry Dove Drive. Hours are 10 a.m. through 6 p.m. daily.

Zim’s failure centres around you, Sir