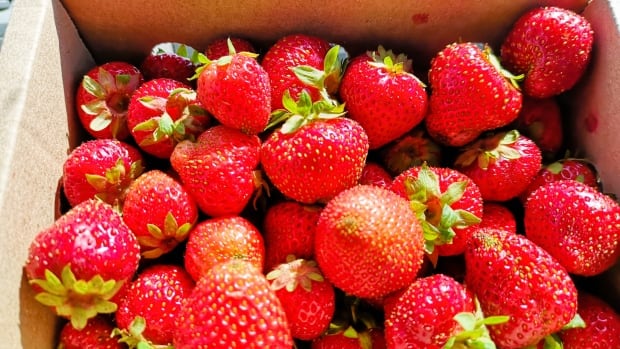 Mid-summer is strawberry time in southwestern Ontario. The delicate, luscious red fruit thrives in a climate of warm days and cool nights.

While many “You Pick” farms are for the most part picked out, different varieties of plants mean that you can enjoy Ontario strawberries for most of the summer months, according to Foodland Ontario.

The season has generally been a good one, though more rain could have helped bridge drier periods which shut strawberry plants down and caused a gap in fruit production.

Tristan Pfenning manages two acres of strawberry fields for Pfenning’s Organic Farms in New Hamburg. His strategy was to plant early-ripening varieties in order to find the greatest demand in the market and he’s already planning for next year.

“We shied away from berries ripening later than June because that’s when everybody has more berries than they know what to do with. The market is flooded and the prices go down,” said Pfenning, who has a horticulture diploma from the University of Guelph.

Just as practical, the early crop means some early income for the farm as the summer growing season heads toward fall harvest.

Pfenning says the lack of timely rain this year could be the shape of things to come: it’s why he irrigates the plants through an underground system of plastic “drip tapes” as a way to control what he otherwise can’t: the weather.

“It’s becoming more and more normal to have a drought at this time of year,” he said.

Another key factor for a good strawberry harvest is a robust environment for pollinating insects: they’re vital not only to the growth of the entire strawberry plant, but also the hundreds of individual little seeds, called acenes, that make up the whole berry.

The perennial plants don’t produce a true berry but rather an “aggregate accessory” fruit. In between the rows of strawberries, Pfenning plants clover to help them flourish.

“Clover grows close to the ground and fixes its own nitrogen, so it doesn’t rob the strawberries of their nitrogen and doesn’t crowd them. Strawberries are an aggregate fruit with lots of tiny fruits that are fused together,” he said.

“If one of them doesn’t develop because it wasn’t pollinated, it will create a sunken part in the berry.”

Insects and diseases can also harm the shape and quality of a strawberry, of course, but ensuring a good environment for pollinators is something farmers can control – as long as the general health of our pollinator population is strong. It’s said that one-third of the food that we eat has been touched by a pollinator.

A tractor, a “raised bed-shaper” that lays the drip tape, a gas-powered generator that pumps water through the underground irrigation system, and a basic filament weed-cutter and lawn mower are the equipment in Pfenning’s strawberry fields. The majority of the labour on a hot summer’s day is done by hand by a crew of workers.

At grocery stores, shoppers frequently find both Ontario-grown and California strawberries, the latter of which are available year-round: The difference in size is most immediately noticeable. The American strawberries are sometimes four times as large.

Pfenning, who visited a California strawberry producer a few years ago, describes those big American strawberries as primarily the result of the specific variety and a longer growing season with ideal conditions for them to thrive – but also an enormous amount of pumped-in water.

“It’s a day-neutral strawberry that is watered from a well with a very high flow rate supplying the plants with all the water they need,” Pfenning said.

“It’s a large fruit, they’re very firm, and they ship well. It was really developed for the global market.”

Pfenning has planted similar varieties here and admits that they do taste good if you leave them on the vine long enough to ripen. Although the California berries sold here redden in colour further as they are shipped, they don’t get any sweeter, he said.

U.S. producers need to be able to truck the berries thousands of kilometres quickly and without damage to their flesh, a difficult task and physically challenging for the berry if you wait until they are ripe.

Growers in southwestern Ontario have shorter shipping distances, so the strawberries can stay on the vine longer and therefore be fresher and sweeter.

Farmers like Pfenning commit land and labour to a fragile crop and hope to generate enough revenue to cover costs that include organic production, harvest, packaging, cooling infrastructure, a relatively short shelf-life and finding a price point that supports the effort against California’s glamourous imports.

While the early part of the Ontario growing season is winding up, he and his crew have a final picking to do – but he’s already started the work for adding another 1.5 acres of strawberry fields for next year.

On the ground in one part of the property are dozens of black thermoform plastic container trays, like those that hold the many small potted plants you buy at a garden centre.

The trays contain a motley assortment of hundreds and hundreds of nondescript green leaves and stems: Pfenning describes them as “primitive” strawberries.

“They’re not full strawberry plants. They’re the runner tips that have a node and a cluster of leaves and some primordial roots. We cut those, stick them in damp soil and water them,” he said.

“When they grow roots, they can be planted in the field. One person will go along with a shovel and plant each plant. By hand.”

Strawberries are a cherished and popular crop signalling summer to consumers, but are labour intensive and face difficult circumstances in the field. They play an important income role in Ontario farming.

“Growing strawberries brings summer revenue to the farm before the fall crops [are ready],” he said.

Asheville food, beverage festivals not to miss in spring, summer 2022