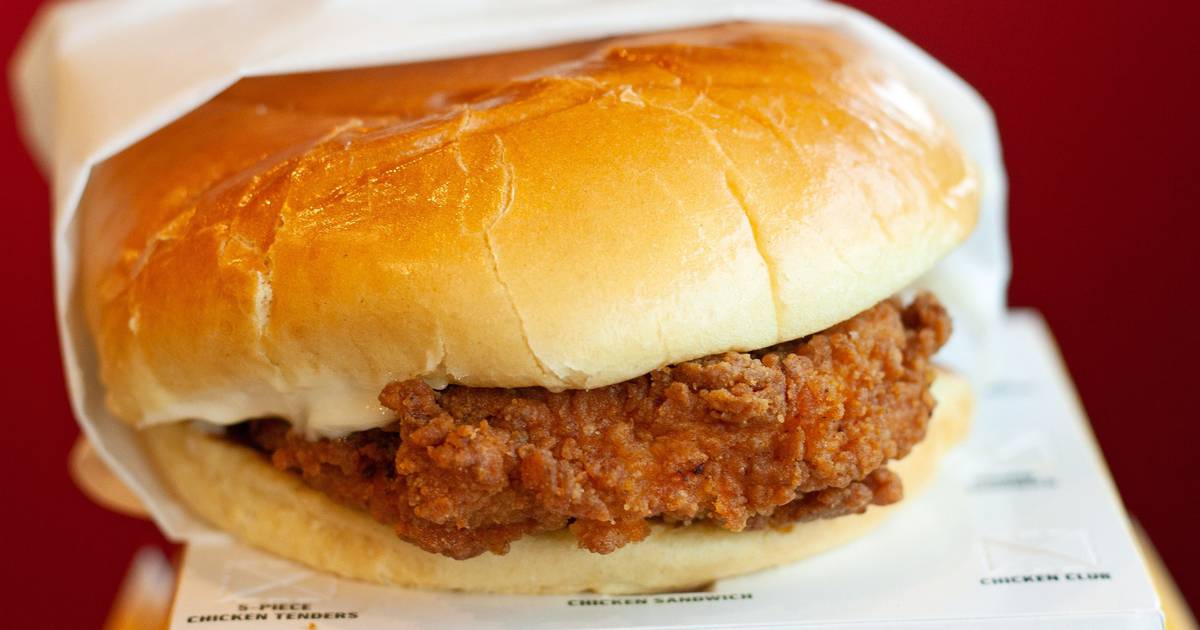 Can it really be time to update this list again? After all, it’s only been a month since the last update, when Burger King’s very decent new options were added.

With Hardee’s releasing its new chicken sandwich offerings, though, I do wonder if we are approaching the end of the great fast food fried chicken sandwich reboot. Sure, there are plenty of small and regional chains that have yet to make a move, but how many large fast food chains are left?

I suppose only time will tell.

Unfortunately for Chicagoans, while Hardee’s did release a few new options, it might take some effort to try one. Currently, there are no Hardee’s locations in the city. The closest one I found is in suburban South Holland (1533 E. 162nd St.), and that one is attached to a gas station. (It’s a very nice and big gas station, but still.)

Of course, when I first ranked all of the fried chicken sandwiches from national fast-food chains in 2019, I found a frustrating scene filled with sparingly few legitimately good options.

This was before the fried chicken wars ignited after Popeyes threw down the deep-fried gauntlet, inspiring seemingly every other chain to step up their handheld chicken game. To say things have improved is an understatement.

In fact, nearly half of the sandwiches on my previous list don’t exist anymore, as a number of chains have released new versions to catch the public’s attention. So much has changed, I decided it was time to do a serious update so I could include all the new fried challengers to the throne.

[ Chicago’s egg roll boom is fueled by Black restaurateurs, who fill the Chinese American snack with everything from jerk chicken to Italian beef ]

As I mentioned last time, not all fast-food fried chicken sandwiches are created equal. In general, there are three categories: those made with chicken patties, with frozen breaded chicken fillets or with hand-breaded chicken. The last one is always preferred.

When breaded and fried to order, the chicken has the best chance of staying both juicy on the inside and crispy on the outside. Frozen fillets can get almost there, though they tend to fall far short. Chicken patties, on the other hand, feature meat that has been ground up and formed into specific shapes. The texture is all wrong.

[ Our favorite Chicago-area takeout dishes of the year ]

One note: I’m only including spicy fried chicken sandwiches as a separate listings if the chicken itself is different. Most places simply add a spicy sauce to the regular sandwich, which can be great. I’ll point this out when necessary.

Like McDonald’s, Checkers has a mostly new fried chicken sandwich lineup, yet bizarrely it decided to leave its weakest offering on the menu. ($1.50)

This one hasn’t changed since my last visit. Even though Dairy Queen uses an actual piece of chicken instead of a chicken patty, it’s tough and bone-dry. ($5.39)

Though Burger King finally updated its chicken sandwich offerings (see below), this one looks like it’s sticking around. The oblong chicken patty is slightly better than McDonald’s McChicken, but the addition of iceberg lettuce and mayonnaise doesn’t add much excitement. ($5.36)

It’s still a bit strange to eat chicken patties formed into rings, but at least the bun is soft and petite. ($1.79)

This straightforward fried chicken sandwich is moderately juicy, but lacks much other excitement, with only a slight hint of black pepper peeking through. ($6.39)

I stand by my assessment that this is the best fast-food fried chicken sandwich that uses a chicken patty. The chicken patty means it doesn’t have a shot of getting into the top 10, but I do think the single slice of cheese works better than a whole bunch of mayonnaise. ($1.89)

Checkers did not do well back in 2019, and it’s puzzling that it kept the spicy chicken sandwich on the menu. But the updated offering is genuinely better. Though not as juicy as sandwiches at other chains, the meat has an interesting spice profile, similar to its seasoned fries. ($3.99)

Culver’s chicken sandwich hasn’t changed. It’s still thin and extra crispy, if not as juicy as others. The fresh toppings are appreciated, but the end result is still slightly less than exciting. ($6.09)

As you can guess from the name, this version trades the bun for two waffles. Unfortunately, once wrapped up in paper, the waffles lose any crunchiness they may once have had. The maple syrup butter sauce does lend enough sweetness to remind you of a big platter of chicken and waffles, which is no bad thing. But the excess of sugar also means you have to be in a certain mood to appreciate it. ($4.79)

Thank goodness Burger King updated its lackluster fried chicken sandwiches, even if it mostly looked to Popeyes and Chick-fil-A for inspiration. The genuinely crispy fried chicken is served on a soft potato bun with a “savory signature sauce.” It’s definitely an improvement from Burger King’s previous chicken sandwich lineup, but it also lacks much to distinguish it from the already crowded field. Had they released this a year or so ago, it might have made more of an impression. ($5.19)

By any reasonable measure, Burger King’s new “spicy” offering is straight-up mild. This seems especially puzzling considering even McDonald’s managed to add some real spice to its new sandwich in early 2021. While weak, it is more flavorful than the regular crispy chicken sandwich, so it deserves the slightly higher rank. Still, a little more spice wouldn’t hurt. Maybe the king can’t handle the heat? ($5.19)

Well done, McDonald’s. I had less-than-kind words for all three of the fried chicken sandwiches on its menu in 2019, noting that they were “painfully salty” and “thoughtlessly” constructed. The new sandwiches are a striking improvement, with tender chicken and a crackly crust that doesn’t just taste like a salt lick.

[ McDonald’s new fried chicken sandwiches are a huge improvement. But do they stack up to Popeyes and KFC? ]

The pickles could be more prominent, but the soft potato roll is a nice touch. The spicy version features a pepper sauce that is honestly hot, which is quite surprising for fast food. ($4.19)

For its revamped fried chicken sandwich, Hardee’s didn’t exactly look hard for inspiration. Instead, it is following the basic format popularized by Popeyes and dishing out a crunchy piece of fried chicken on a bun with mayonnaise and pickles. After a few years of every other fast food chain copying this style, this doesn’t exactly qualify as exciting anymore. But the results are well done, with the juicy and well-seasoned chicken standing out. It’s also certainly an improvement over the previous fried chicken sandwich on the menu, and worth checking out if you can find a nearby location. ($4.79)

Giardiniera is the quintessential Chicago condiment, and exactly the sort of component that should go on a fried chicken sandwich for a Chicago-based restaurant chain. The sour cream-based giardiniera sauce on this Portillo’s newcomer is slightly spicy, a little acidic, yet still creamy and smooth.

[ Portillo’s new spicy chicken sandwich is good, but the one at Chubby’s Char House is great ]

As for the chicken itself, the breading also has a faint hint of heat. I do wish Portillo’s would have learned from the success of Popeyes and Chick-fil-A and replaced the lettuce and tomato with some thick-cut pickles. While it might not best the iconic Italian beef or a Chicago dog, it’s a solid pick. ($5.89)

This chicken finger slinger ranked much higher last time, mostly because so few places hand-breaded the chicken for their sandwiches. Because that has changed, this offering doesn’t stand out as much. Plus, the chain uses three tenders instead of a larger piece of white meat, so the sandwich doesn’t fully coalesce into a thoughtful whole. Instead, it tastes like three great chicken fingers on a bun … which isn’t such a bad thing. ($7.19 with fries and a drink)

Wendy’s actually released a new version of its chicken sandwich a few months ago, but as I noted then, the differences are slight. It’s moderately juicier and crunchier, tasting more like a standard software update than a completely new product. ($4.99)

The spicy offering at Chick-fil-A is pretty tame, especially compared to some of the new options. Fortunately, the chicken is still remarkably juicy and tender. ($4.65)

Although Wendy’s updated its regular chicken sandwich, it made sure not to fuss with its spicy chicken sandwich. In 2019, it was the only offering that tasted even remotely spicy, though these days it’s no longer close to the top. But it’s still a well-thought-out sandwich, with the heat adding more complexity than actual burn. ($4.69)

The award for most improved fried chicken sandwich goes to Church’s Chicken. Last time I checked, the chain’s dismal offering featured a tiny and generic-tasting chicken patty. But now the chicken is hand-breaded and fried to order, resulting in meat that is abundantly juicy. The crackly crust is light and remarkably not greasy. ($3.99)

Chick-fil-A has grown more popular over the past few years, and it’s easy to see why. The chain has no need to revamp its offering, because it has always been good. The meat is especially tender, and the steamed bun is a great touch. My biggest issue is that the crust isn’t all that crisp, explaining its placement here. ($3.75)

KFC really stepped up its game with its new sandwich, which is both bigger and crispier than the previous disappointing options. Sure, it’s clearly modeled off Popeyes, with a brioche bun and thick-cut pickles, but it’s done so well. I do prefer the spicy version, thanks to the kick it gives each bite, but the classic is not a bad place to start. ($3.99)

Back in 2019, I noted that this sandwich was so good the ranking “was not even close.” So why the fall to No. 2? The chicken still features a deliriously crispy coating, which gives way to the juiciest meat of any sandwich on this list. The shredded lettuce and thick-cut pickles also add a cooling counterpoint to the warm chicken. But the whole package doesn’t quite come together with the same kind of magic as my No. 1 pick. ($7.29)

The sandwich that truly ignited the fast-food fried chicken sandwich wars features an absurdly crispy crust and tender chicken laced with a complex spice profile that slowly, yet relentlessly reveals itself after each bite. The fat pickles add a snap of tartness and crunch. The original adds a swipe of creamy mayonnaise, but the spicy version’s sauce lends a lingering glow of heat that creeps up on you. It’s nearly irresistible. I should know. I was genuinely impressed when I first tried the sandwich, and keep returning to it again and again. ($3.99)

What to eat. What to watch. What you need to live your best life … now. Sign up for our Eat. Watch. Do. newsletter here.

Healthy food is hard to come by in South L.A. These activists are changing that