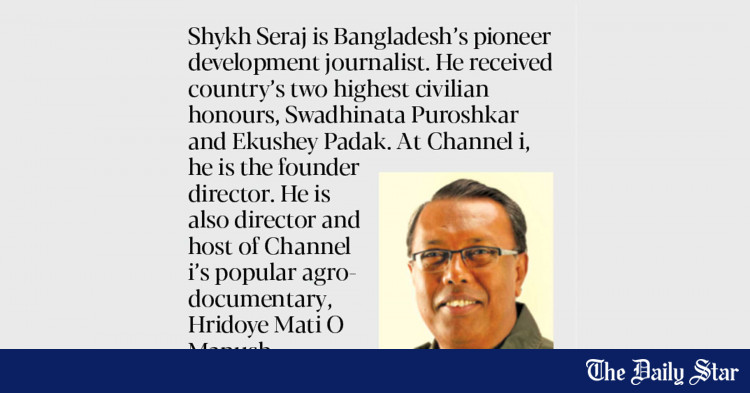 Boro season is going on in Bangladesh and the harvest will start in full swing within a few days. Meanwhile, farmers in the haor areas of Sunamganj, Netrokona and Kishoreganj have been going through a difficult situation as standing paddy in vast tracts of land have been submerged by the recent flash floods. State Minister for Water Resources Zaheed Farooque at a press conference said paddy on 5,000 hectares of land have already been damaged by the flash floods. Many farmers were compelled to harvest their green paddies in fear of getting completely damaged. The haor areas is called the paddy reserve of the country, but farmers have to count huge losses due to such disaster every year.

Two years of the COVID-19 pandemic have utterly devastated the world economy. On the other hand, the Russia-Ukraine war started when the world was trying to return to normalcy. The impacts of the pandemic and the ongoing war spread worldwide. At present, the whole world is hit hard by three Cs: Climate, COVID-19 and Conflict. The fourth C, which is the rise of fuel and fertilizer cost in the international market, is also quite alarming. Especially, the price of fertilizer went up threefold while the prices of various daily essentials have also gone up. One of the reasons of our agricultural development is the uninterrupted subsidy provided by the government. Although Bangladesh is an agricultural country, the entire demand for fertilizers is almost met through import. However, whatever the import price is, the government sells fertilizers to the farmers at nominal prices by adding subsidies. If the government did not provide fertilizers and subsidies as per the regular demand, the cost of production would have multiplied. Fertilizer prices in the world have not only increased, but its production is also expected to decline due to the ongoing Russia-Ukraine war.

According to Bangladesh Fertilizer Association, Bangladesh produces about 10 lakh tonnes of urea. The rest of the demand has to be imported from the UAE, Saudi Arabia and Qatar. TSP fertilizer production is about one lakh tonnes while the rest is imported from Morocco and Tunisia. Meanwhile, the DAP fertilizer production is almost the same and the rest is mainly imported from China and Jordan. Most of the MOP fertilizers is imported from Belarus, Russia and Canada. Agriculture Minister Dr Abdur Razzaque said due to increase in the subsidy by additional Tk 9,000 crore (USD 90 billion), now the government will have to pay a subsidy of Tk 30,000 crore (USD 300 billion). This is a big challenge for the government. Although urea is bought at Tk 96 per kg (USD 1.1), farmers get it at Tk 16 (USD 0.18). They are getting TSP of Tk 70 (USD 0.8) at Tk 22 (USD 0.25), MOP of Tk 54 (USD 0.62) at Tk 15 (USD 0.17) and DAP of Tk 93 (USD 1.1) at Tk 16 (USD 0.18) per kg.

I talked to Faizur Rahman Bakul, head of one of the leading fertilizer importers in the country, and he said sustainable development is not possible in any sector without becoming self-reliant. He also added that we can’t increase the local production overnight to reduce the import reliance and stressed on government’s support for the development of the private fertilizer production industry. However, the issue of wastage of natural gas in fertilizer production is also an ‘open secret.’ It is said that it is possible to meet one day of the electricity demand of the whole country with the amount of gas wasted by four state-owned fertilizer factories in nine days. The four factories require 43.72 million cubic feet (MCF) of gas to produce an average of around one tonne of urea. In other countries of the world, 25 MCF gas is used to produce the same amount of fertilizer. According to Bakul, the main reason for this wastage is the old machinery used at the factories.

I believe that the government has a well-thought plan to resolve all the crises of the farmers. Certainly, the world market is planning for the future, keeping the fertilizer crisis in mind. If we can reduce wastage and get our farmers used to with limited use of fertilizers, only then, we will be far ahead. In this case, every stakeholder must remain aware. We must think of our motherland, the farmers and the farming sector, above everything else.

What happened at the Vero Beach seafood festival