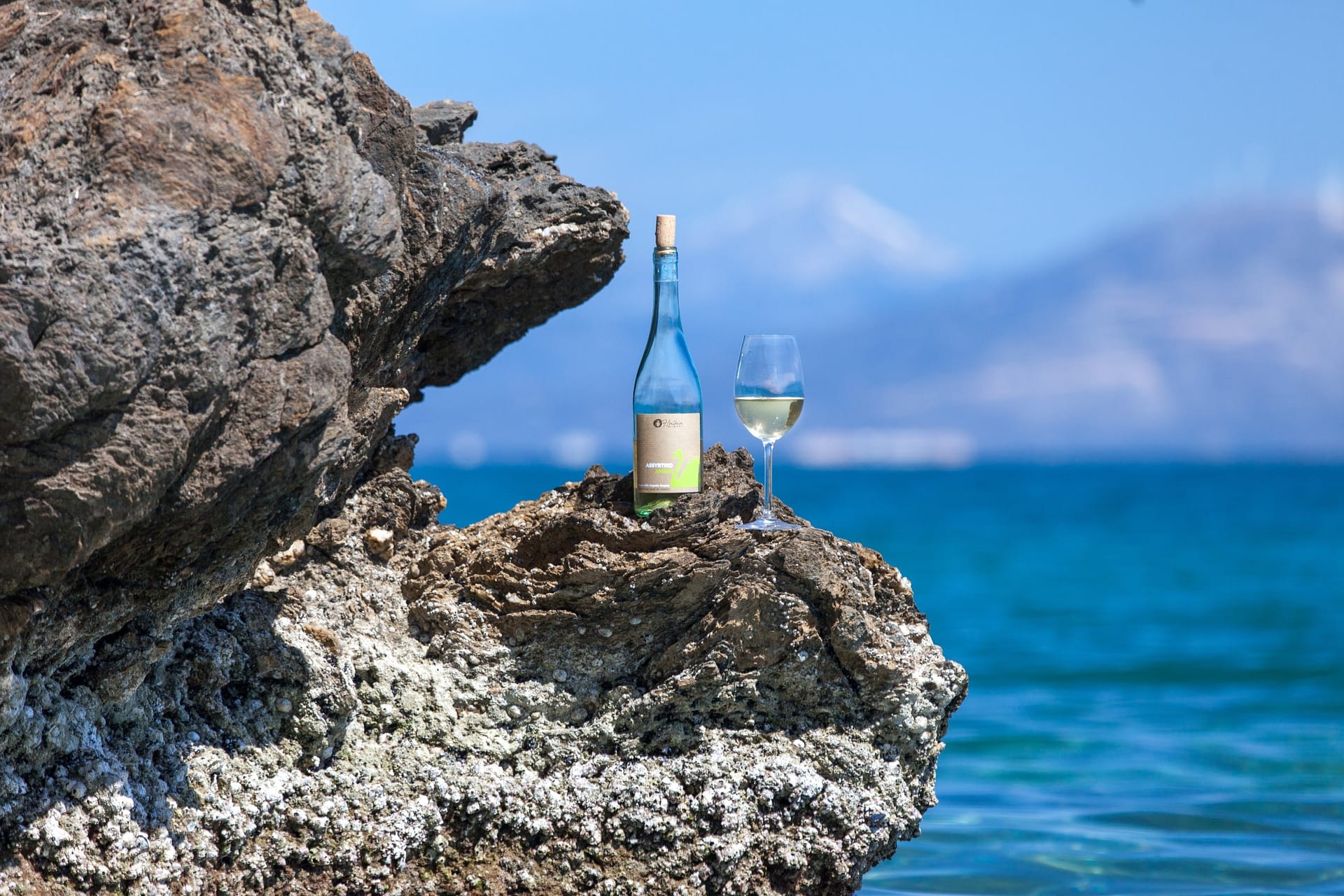 From shots of ouzo to refreshing visinada and herbal teas, there’s plenty of tasty drinks to sip on while discovering Greece’s treasures. If you can’t visit right now, you can still learn more about the must-try beverages that define the country and even try making some of these authentic refreshments at home!

Crete’s island produces Soumada, a syrupy non-alcoholic, almond-based drink made with a mixture of almonds, sugar, and water. It is then simmered in sugar syrup to create this signature Cretan drink.

Often, the almond syrup has a bitter essence, so cinnamon sticks, cloves, or orange peel is added for flavor.

Tsikoudia, another Cretan favorite, is at the top of the list of must-tries. This is a spirit made from fermented grape pomace, which is the remains of grapes in winemaking. Clear and colorless, Tsikoudia has high alcohol concentration varying from 40% to 65%. Its production is secret is that it is only distilled once, helping it preserve its natural flavors and aromas. Each Cretan village only has one or two families permitted to make Tsikoudia.

Besides being an exceptional drink on its own, Tsikoudia is an essential ingredient for yet another Cretan spirit, Rakomelo. This drink includes Tsikoudia, honey, cardamom, cinnamon, or other regional herbs. As well as being popular in Crete, this aperitif travels all over the Aegean Sea and the mainland. Traditionally, it is used as a home remedy to treat a sore throat or cough.

As much as Greeks love their coffee, a hot alternative is Tsai tou Vounou (mountain tea.) Also known as Ironwort or Sideritis, mountain tea is a plant found in the mountains of Greece and its neighboring countries, therefore despite its name, it’s not actual tea, but a plant.

Due to the plant’s high level of antioxidants, it is considered the healthiest hot beverage. The dried flowers and leaves can be bought in many shops and even supermarkets. In terms of execution, simply add boiling water over it and let it steep for 10-15 minutes. Although honey is a popular addition, there is no need to sweeten mountain tea as there is already a flowery infusion.

Despite being around for over 2000 years, Retsina remains one of the most talked-about Greek wines. Flavored with resin, which is a sticky substance produced by pine trees, this wine is produced in many regions of the country.

While the resin’s original use was to cover and insulate wine in clay amphorae, locals started using it as a preservative to keep the wines from spoiling. Even after barrels and glass bottles were invented, people would continue to use this winemaking style as the resin flavor was distinctive.

Mastiha, is a famous liqueur flavored with mastic, a resin from the mastic tree that grows lavishly on Chios Island. This unique ingredient is what gives the liquor a characteristic pine and herbs flavor. To make the drink, sugar is added after then locals distill the mastiha crystals. In some cases, it is mixed with Prosecco and served as an aperitif, however you can still enjoy it plain.

Known as the most popular non-alcoholic beverage served on the beaches of Athens, Visinada is a sweet, refreshing drink traditionally made using sour cherry juice and sugar. It is then boiled until condensed into a thick, dark purple syrup. It contains a high level of Vitamin C, making it everyone’s favorite summer refreshment.

An alternative version of Visinada which is mostly served in fast food restaurants and cafes uses cherry pulp. The sweet cherry syrup is diluted with water or soda and then ice is added. This type of syrup however is processed, therefore, it contains a lot of sugar.

If anise liqueurs are your favorite, then Ouzo is the drink for you! Ouzo, the national drink of Greece, is undeniably known around the globe. The alcohol is diluted with water and flavored with a combination of aniseed and various botanicals, such as fennel seeds, coriander, cardamom, nutmeg, cinnamon, ginger, or angelica. The chosen herbs determine the ultimate flavor character and quality.

There are multiple ways to enjoy this liqueur with one of the most popular being with water. Others might pair it with tomato or orange juice. With either choice, the locals enjoy this drink with assorted side dishes called mezedes.

Zivania, a Cypriot traditional alcoholic drink is a pomace brandy made from grape, pomace and dry wine with a light aroma of raisins. It has been around since the 15th century when the Republic of Venice ruled Cyprus, and its production continued through Ottoman and British rule on the island.

Nicknamed “firewater,” Zivania has no acidity or sugar and is known for having a light aroma of raisins. However, the alcohol’s production must follow strict regulations including grape quality and fermentation process. As zivania ages, it acquires a stronger flavor and aroma, making it a special treat for visitors and guests of the island.

Named as a legendary wine by Forbes, Commandaria is widely recognized as the oldest wine still being manufactured, with records of its production dating as far back as 800 BC. It is made from sun-dried grapes of the varieties Xynisteri and Mavro, which grow on the southern slopes of the island’s Troodos Mountains.

The name Commandaria dates back to the 12th century and the Crusades. King Richard the Lionheart captured Cyprus and held his wedding there. It is believed that he served the local wine at the festivities, calling it “the wine of kings and the king of wines.”