The Hidden Hut, a wooden beach café, can only be reached by foot. Park the car at Portscatho and follow the South West Coast path for ten minutes until the track opens to Porthcurnick beach. The chef and owner, Simon Stallard, cooked for world leaders at 2021’s G7 summit, but he’s most in his element barbecuing fish that’s caught in the bay. Lunches are a paper plate and beach picnic affair of grilled mackerel and summer salads, but bag a ticket for a feast night and expect fresh specials as you watch the sun setting below the ocean. (Mains from £9; hiddenhut.co.uk)

Having spent ten years working in some of Cornwall’s best restaurants, Ben Tunnicliffe decided to helm his own project in 2012, taking over an 18th-century boozer in Newlyn. The Tolcarne Inn has a wood-burner and rickety tables filled with date-night couples, but its chalked-up menu is far fancier. Sourcing ingredients from the day boats that land a few hundred metres away, the chef also works with local growers and community farms to create dishes such as ray wing with Cornish earlies and organic fine beans. (Mains from £18.50; tolcarneinn.co.uk) Behind the scenes at Outlaw’s New Road

The eagle-eyed may recognise Port Isaac as the setting of Doc Martin, but in recent years it’s Nathan Outlaw’s name that has become synonymous with the seaside village. The chef’s flagship restaurant, Outlaw’s New Road, incorporates the ocean into every part of the dining experience, from Cornwall’s rugged coast through floor-to-ceiling windows to the Michelin-starred menu that changes according to the day’s catch. While you’ll want to wear your glad rags for New Road, Outlaw’s Fish Kitchen — a short walk away — has a more casual vibe and slightly less expensive set menu. (New Road set menu £105pp; outlaws.co.uk) 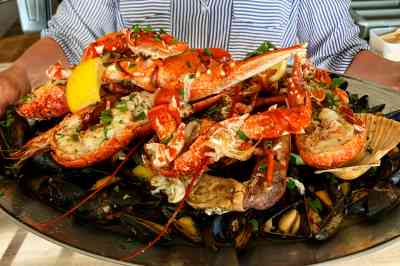 The seafood platter at the Fish House Fistral

With its proximity to the sea, a surf shop and a pizza restaurant, it would be easy to write the Fish House Fistral off as another Newquay tourist trap. But the beach-hut restaurant is run by Paul Harwood, a chef who spent 14 years cutting his teeth at Rick Stein’s in Padstow. The keen surfer sources his produce daily from Newquay harbour and whips up a menu inspired by his travels. Peel off your wetsuit and join the local surfing community for laid-back meals of Balinese monkfish and Sri Lankan prawn curry. (Mains from £15.95; thefishhousefistral.com) Minutes from Newlyn harbour, Mackerel Sky Seafood Bar puts a street food and tapas twist on fresh fish, from dishes of crab and jalapeños piled on nachos to a katsu take on sole. Spaces are snapped up fast at the diminutive joint, where bar stools and high tables give you a front-row seat to the open kitchen — though the best people-watching opportunities are on the wobbly metal tables outdoors. A great soundtrack and young chefs add to the ambience of this fun little spot. (Taster plates from £8.50; mackerelskycafe.co.uk) 6. Prawn on the Lawn/Farm, Padstow

This nomadic restaurant moves with the seasons. In summer you’ll need a car or sturdy pair of walking boots to find Prawn on the Farm. The white marquee is strung with rattan lamps and bunting, but it’s the beautiful views over the Camel estuary that set the scene. In winter the restaurant relocates to the centre of Padstow. Both iterations serve fantastic, locally sourced small plates, along with whole fish and Padstow lobsters and crabs. (Small plates from £9; prawnonthelawn.com) 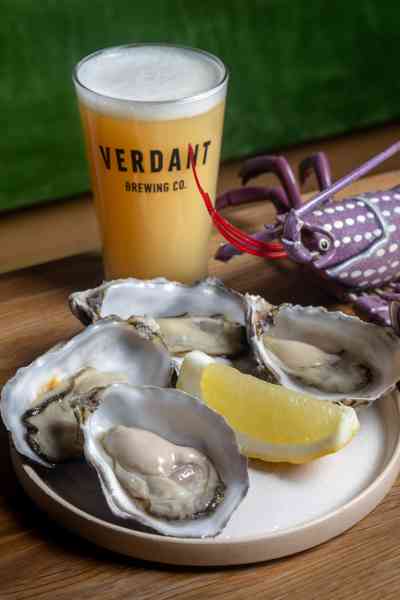 Forget white wine and fish, the Verdant Seafood Bar pairs its dishes with beer. The tiny navy blue restaurant on Quay Street is owned by a brewery, less than five miles away in Penryn. Eight keg lines and a fridge stocked with unusual bottles including naturally fermented Mills Brewing Table Beer and a whisky barrel-aged Norwegian stout ensure there’s something new to try on each visit — as does the seasonal menu, with bites such as lobster-stuffed hot dog rolls and battered monkfish in Korean barbecue sauce. (Small plates from £3; verdantbrewing.co/pages/seafoodbar)

All the best and worst Platinum Jubilee supermarket mains, drinks and cakes

Famous British goods could lose out under UK-Australia deal