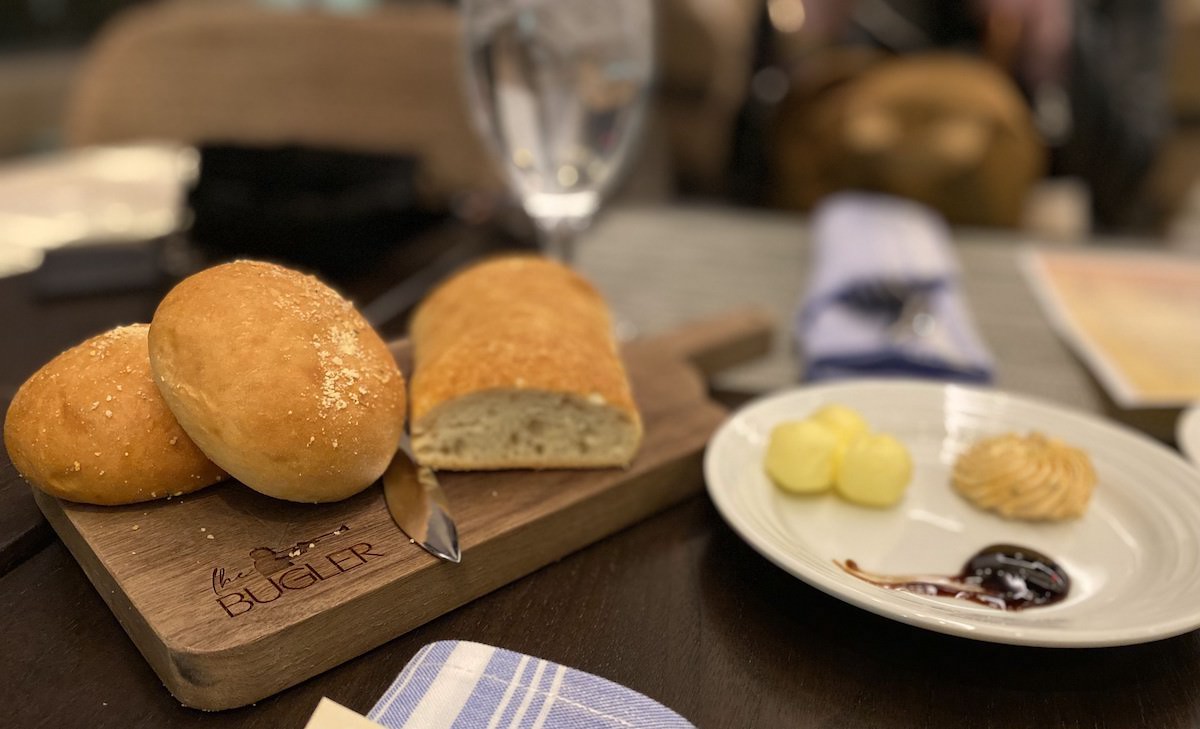 While on assignment to gamble away my savings last spring, I made a reservation at Oaklawn’s new fine dining establishment The Bugler so I wouldn’t be hungry after crippling losses on the craps table. The Bugler is part a $100 million Oaklawn expansion announced shortly after voters approved a 2018 constitutional amendment authorizing four casinos to operate in Arkansas. The expansion included a luxury hotel, a spa and an event center in addition to a food court and two restaurants, including The Bugler. The other restaurant The OAK room & bar is located within the casino.

The Bugler is situated just outside the casino which can be reached by stairs or escalator from the lobby.

The restaurant announces itself with the statue of a bugle player in the hallway blowing imaginary musical notes right into the restaurant entrance which beckons with a row of tables running parallel to the race track inside and on an adjacent patio. Pro tip: Try to make your reservation at sunset. I did not do this, but noticed during a casino scouting report earlier in the evening that I’d made a mistake. Adorned with chic modern lighting and sleek restaurant booths, The Bugler feels both upscale and casual but doesn’t take itself too seriously. A large cartoon-style painting in the back of a horse jockey thinking about a massive Thanksgiving spread is visible from about anywhere in the restaurant.

Headed up by James Beard Award-winning executive chef Ken Bredeson, The Bugler feels like a natural fit for Oaklawn, a Hot Springs entity that previously hasn’t been known for its culinary offerings, aside from its massive corned beef sandwiches that famously sell for .50 cents a pop on opening day of the racing meet season.

I typically try to avoid carb-heavy filling appetizers so I can properly gorge on entrees, but I lost control of myself overindulging on complimentary warm bread served with creamy butter, tomato butter and a balsamic reduction.

Such a setting called for a cocktail so I tried The Bugler’s signature Manhattan, which uses a housemade barrel-aged vermouth. It was delicious and gave me the false confidence I needed, because very soon I’d be making some bets that would instill fear in the hearts of the Oaklawn pit bosses.

I changed my mind about ordering the charcuterie when the waitress told us we had to try the crab cakes (two for $21). The jumbo lump crab cakes were piping hot and had a nice crispy outer layer and were served on top of a tasty, sweet corn relish with tarragon remoulade that I continued to scoop up with my spoon after the crab cakes were gone.

My dining companion ordered a caprese salad ($15) for us to split with olive oil, aged balsamic and vine ripened tomatoes. The tomatoes were wedged and served upright in a layer of delightful pesto with several fresh basil leaves resting atop the almost hidden square of fresh mozzarella.

My girlfriend’s 6-ounce steak was preceded by a knife case presentation in a sort of choose-your-own-steak-knife adventure. I ordered the shrimp and grits and was informed that it’s not your typical shrimp and grits. This only made me want it more. Encircled by leeks and served with cubed pork belly, a fried egg and what I assume was a balsamic reduction, it was both savory and a little sweet and somehow less rich than typical shrimp and grits.

The Baked Hot Chocolate dessert was outrageously decadent: Ouachita chocolate cake in the bottom of a coffee cup is topped with piping hot marshmallow fluff that’s bruleed and served with a wafer cookie straw.

It’s a surreal dessert texture because the fluff molds back into its previous shape after taking a bite, making your bite disappear like it never happened. I was full at this point. So was my partner. But I kept saying, “Did you see the fluff?”

“No, check it out. It fluffs back into place. Watch this,” I kept saying until the dessert was gone. I’d go back for that dessert alone.

I was so full when I walked up to the craps table that I lost all my confidence from the Manhattan cocktail and preceded to make foolish bets and lose $100 in ten minutes. I went back to the room, turned off all the lights and enjoyed the nighttime view of the track with a $14 room service cocktail. Highly recommend it.