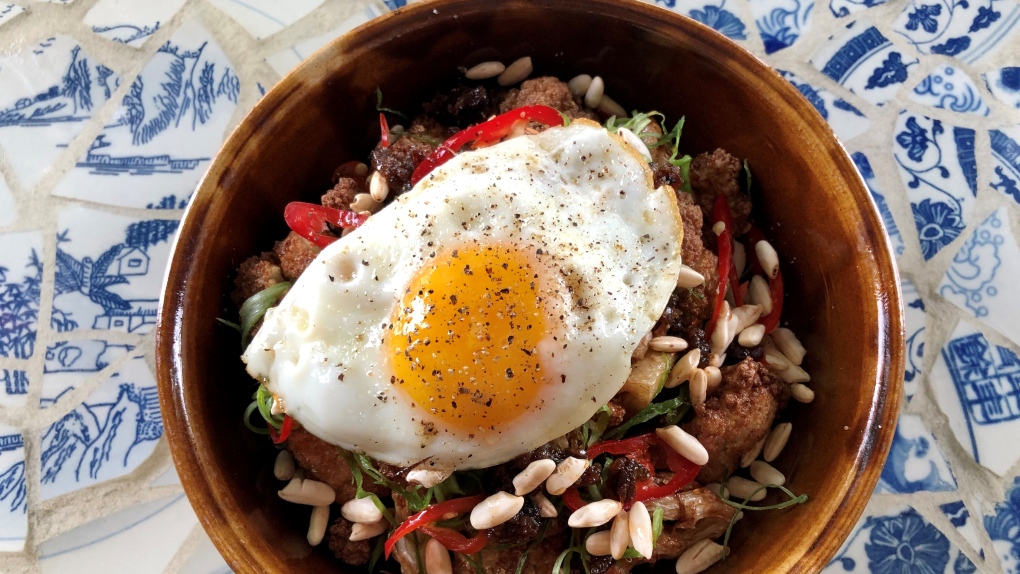 The owner of a Bloorcourt Vietnamese restaurant wanted to make a change in the industry. He noticed cooks and chefs were departing or pivoting to front-of-house, not because they wanted to leave the kitchen, but because they were poorly treated.

“This is years before the pandemic, years upon years, and so the writing on the wall, to me, it was like, this is a problem in the restaurant industry altogether. This is a really, really big problem,” David Huynh, owner of Vit Beo, told CTV News Toronto.

Baby Bok Choy at Vit Beo (Hannah Alberga/ CTV News Toronto)“There’s such a huge disparity between the compensation for and appreciation for cooks versus servers and front-of-house staff,” he said.

After witnessing this workplace culture firsthand, Huynh wanted to push back.

To do that, he put his cooks at the centre of Vit Beo when he opened the Bloor Street and Ossington Avenue restaurant in 2018, just a block east of his massively popular bar Civil Liberties. From high stools, patrons can watch trays of dumplings lined up in rows for steaming and later hitting the pan for serving.

“I wanted to slowly awaken consumers and customers and diners to the idea that you can see all the hard work that’s going into this. If you didn’t think about tipping kitchen staff before, I wanted people to think twice about that. Where is it going? Why should they? Why do they deserve it?”

At Vit Beo, customers walk into an open kitchen, which is also their pantry. Bottles of soy sauce and boxes of kosher salt line their western wall. When kitchen staff run low on staples, they climb up on a chair and snatch it from that shelf

Huynh’s appreciation for the time and energy that goes into preparing a meal began a long time ago.

David Huynh, owner of Vit Beo (Hannah Alberga/ CTV News Toronto)In junior kindergarten, his grandmother picked him up from his half-day of school while his parents each worked several jobs. Almost immediately when they got home, she started preparing dinner for their 13-person extended family living together in Toronto.

“We had a very special connection where it was really just the two of us for so many years,” he said. When his grandmother died a few years ago, Huynh said he didn’t properly process her passing.

“I think that my way of grieving and trying to deal with the emotional impact that had on me…the only way that I could at the time was with food.”

By trying to recreate the dumplings he watched her methodically seal, he felt like he could connect with her, and in doing so, touch his own Vietnamese heritage.

Part of strengthening that connection meant pushing forward the narrative of Vietnamese food in Toronto. At Vit Beo, customers don’t get a bottle of Sriracha at their table or a bounty of bean sprouts in their dish.

Vegan dumplings at Vit Beo (Hannah Alberga/ CTV News Toronto). Instead, his beef stew with thick rice noodles was inspired by a gnocchi dish made with cheek ragu that evoked a vivid childhood memory of the Sunday stew his family ate around a small table with the sun beaming in on hot summer days.

In Toronto, Huynh said people often get wrapped up in the idea that Vietnamese food should look and taste a certain way.

“But there’s this huge influx of Chinese influence, again, all over again, which already existed before, but it’s just new now. There’s been more of a Japanese population since the 1990s, when the border opened up. All these things came into the culture of Vietnam,” he said.

“An amazing thing comes out of it, like this yearning to really express yourself within all of that conflict. That’s what’s authentic to me. I take that idea and I bring it here.”

Rabobank: Global seafood demand has peaked and will now weaken